As per my last post about Baby Stuff (you can read HERE), I wanted to write a specific post about our Nursery. After the initial excitement of finding out we were pregnant, once we had told everyone we sat down and started to think about what we needed to get in place for Albump’s arrival. We still had a few months to go and we both knew we had enough time to work on our spare room and make it into an AWESOME nursery. Now we have finished it I wanted to give you all a tour! We are both really proud of this room, and let me tell you, if we didn’t have a baby on the way then I would be more than happy to make this my bedroom instead of his. Sometimes I just like hanging out in there it’s so cool.

So imagine a blank white box. This is basically what we were starting with. So we all know whose room this is, we have a home-made door sign that Lucy made. Everyone needs a name plate on their door! 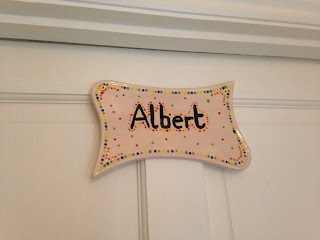 We decided to jazz up one of the walls with some colourful wallpaper. Lucy found this excellent Quentin Blake Cockatoos wallpaper which we loved (Quentin Blake does the Roald Dahl drawings, along with his own books), so we decided to do one of the walls in this! I had some previous excellent wallpapering tutorage from Albert's Granddad Paul, so I managed to get this done myself with a ladder and a few other wallpapering tools, and after I washed all the paste off myself I was pretty proud, I think it looks flipping cool!

Here is me blending in, being a cockatoo whilst wallpapering: 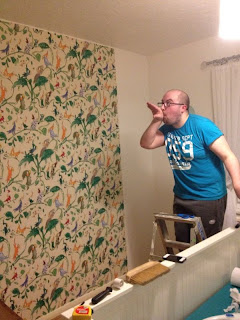 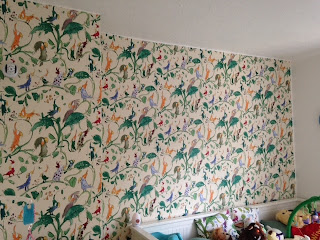 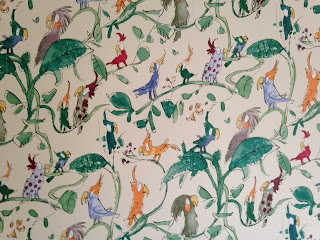 We had a great idea as well after we finished wallpapering, as we had some left over. If you don’t know the story of Cockatoos by Quentin Blake, to cut a short story shorter, basically they escape and hide in this old dude’s house. So we decided to cut them out of the wallpaper and paste them around the room, as if they had escaped ‘off’ the wall.

Here are a few cockatoos dotted about the room: 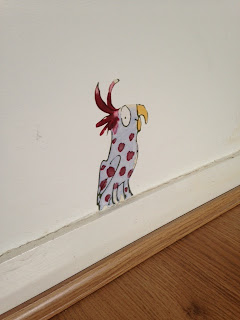 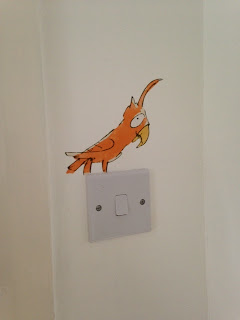 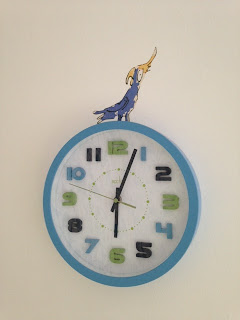 Next we have a cot, this was a lot easier to put together then it was to paper the walls. We have this stretchy white stuff that goes round the bars, I think to stop the baby sticking their hands through them. I like it though, as it looks a little bit like a wrestling ring now. CAGE MATCH! Who wouldn’t want to sleep in a wrestling ring? Also on the cot is a nice mobile that goes round and makes a mobile noise. It has a cow and sheep on it and stuff, I did look for a nice bird one to match the cockatoos but couldn’t see one anywhere! As we all know, most cows don’t fly and most birds do, so a soft squishy toy bird mobile would be a good seller I reckon. Dragon’s Den anyone?

Picture of the Wrestling Ring cot and Flying Animal Mobile: 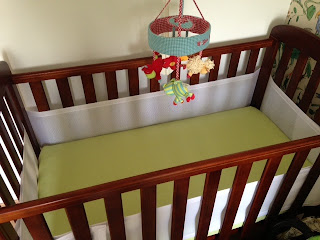 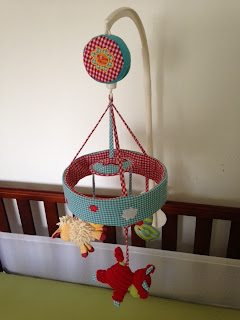 We decided to decorate the other walls and found these brilliant thin shelves from Ikea, they only stick out about 4 inches or so, so you can have a few in the room without giving up too much space, or smacking the corner of your head on them. They are like presentation shelves, so we wanted some nice books to go on them. Cue a box set of all Quentin Blake books to match the wallpaper. Once Albump is bigger he can choose his own favourite books to go up there (probably something involving dragons).

Thin shelf with QB books and Cockatoos on the ends: 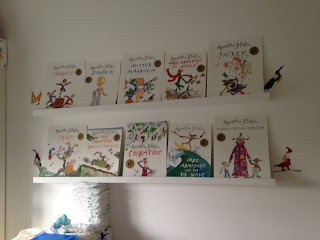 Another shelf with Cockatoo pictures on: 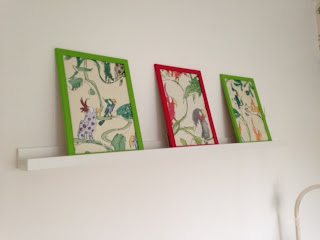 Lucy, being the amazing wife she is, managed to get some QB fabric and make some cushions with it as well! So we are really going with the bird theme. I hope Albump doesn’t grow up with Ornithophobia (fear of birds). 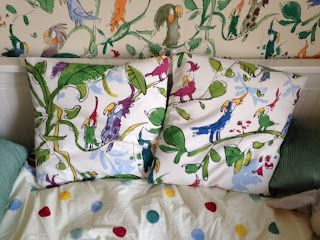 We also have a rocking chair that Lucy can sit in and rock the baby to sleep. I haven’t rocked so hard yet that I fall off but I’ve been close. You have to know how far you can go back! Lucy doesn’t know this yet but she will find out now, and I’ll probably be banned from ‘riding’ the chair like a bucking bronco from now on, especially when holding Albert. 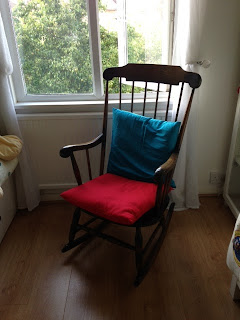 Finally we have a little bookcase, already filled with books waiting for Albert to read! We are hoping he will be a bookophile just like his dad! Some friends of ours, Danni and Charlie, have brought us some DIY ball lights that we put together and have put around this as a sort of cool nightlight. 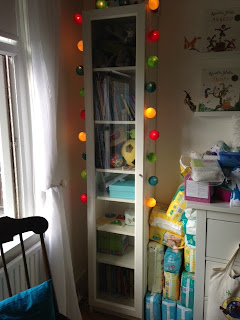 Finally, we have some hanging mobiles! No son of mine will have a room without some sort of Dragon in it, so we have this baby-fied dragon mobile. We decided to hang it over the changing mat area so he has something to look at when we change him. Who wouldn’t want to look at flying dragons while someone cleans you? I am thinking of getting one to put over my bed (is this ok Lucy?)

We also have another bird hanging from the ceiling. It’s a parrot this time, and he flies! (sort of). You pull the cord and the wings go up and down (realistic bird action). SQUAWK! 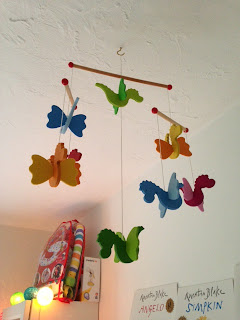 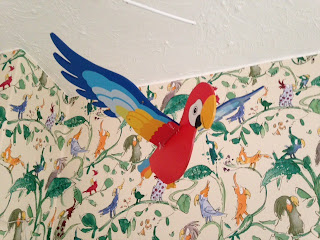 And that’s about it for the nursery! We are really proud of it, and we hope Albert enjoys growing up in it. Hey even if he doesn’t, he can have my room and I’ll move in here, I love it!