Nesting - What's that all about?

As you may or may not know, Albert has finally been born and I am now the proudest daddy ever! It has already changed my life, and it really is amazing beyond all belief. I dont want to say too much here as I will write a whole load of other posts on that! So I had written this before the birth and thought I would post it now, and then write a post later about the birth of my awesome baby boy!

I thought this time I would do a post on Nesting (and the associated DIY).

So what is Nesting? Wikipedia tells me it’s building or having a nest, or if you are Human like most of my readers are (you know who you are), then Nesting means basically getting towards the end of the pregnancy, and forgive the swearing here, realising you have to get your shit together. It normally goes along the lines of "Argh! The baby is coming and there are still a million things I need to do!" But more sort of worrying rather than singing: 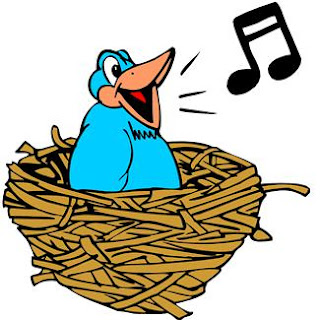 I was a bit dubious of the whole Nesting thing a while back, I sort of figured it was a bit of an Old Wive's Tale. A few people have told me that they had Nesting instincts when they were in their pregnancy, but I just kind of thought well that would be a bit normal anyway, was it actually a THING though? Could it be defined? Was there an actual physical urge to do things? So I did a quick google (very scientific) and realised yes it was a thing, people seem to have documented it and yes it does happen. It’s on the internet HERE at www.whattoexpect.co.uk and you know what they say about things being on the internet! So I wondered when I would start feeling this, and what it would be like.

So later on, it had been a while And I wasn’t sure if I would ever have any Nesting instincts or not, I thought it might turn out to be more of a female thing what with all their hormones campaigning and raging and generally being up and down more than a yo-yo. Now we are at the end stages of the pregnancy, I’ve stepped back and taken a look at myself (not literally, that doesnt help) and I noticed that I seem to have created a list of things to do (or Lucy has created one for me, same difference), and all of a sudden I seem to be desperately trying to get them all done! I realised I have been Nesting, I’ve been doing it! I’m Nesting! I’m a Nester! I love Nestlé! Feels good to be normal.

I feel like I have a lot more energy for these things now whereas generally I can be a bit of a lazy arse sometimes. It’s like a race and the finish line is the birth, and I’m getting closer and closer, but I can’t finish the race until I have done these things, that’s the cut-off and they need to get done, I need to finish the race, I NEED TO PAINT THE GARDEN FENCE BEFORE I FINISH THE RACE!! 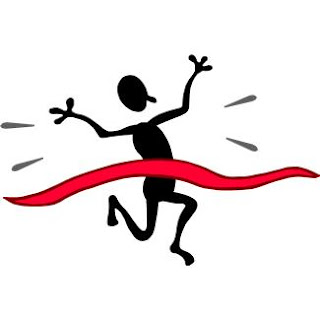 Before I knew it I had worked through the list, added more things to the list, and generally kept the list as my bible. I feel pretty happy that I have managed to get most of the things done on the list, and below are some of the things I have been working on. I know everyone talks about cleaning when Nesting, and to be fair there has been some of that, but cleaning is boring, I am only interested in things that involve hammers and power tools and paint. Nothing that involves bleach and sponges and Windolene (although again to be fair, Windolene is my favourite cleaning product, it’s bloody magical!)

I’ll start off with the biggest area of Nesting. The Nursery! As I’ve already written about that in depth (that was a whole heap of Nesting in one go), you can read it HERE.

Previously in my post about baby stuff HERE, I mentioned a High Chair. I Nested hard on this bad boy. A few months ago, Lucy’s mum found this vintage High Chair for us, and as Lucy is a lover of all things vintage, we decided that we would do it up ready for Albump’s dinner time. Here is the chair before we started. 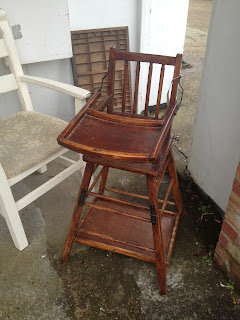 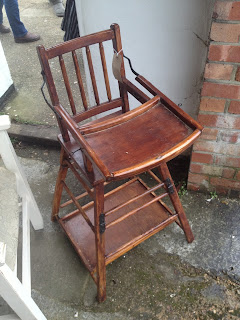 It’s a pretty neat chair, lots of history. How many little people had their tea here? Maybe a Tiger came one day? So first of all, I dismantled it a bit to make it easier to sand, and glued/nailed back together a few wobbly bits to sturdy it up. I then sanded down the whole thing from top to bottom. First with sandpaper on the little bits, then just like Tim the Tool Man Taylor (remember him?), it was TOOL TIME! I used a power sander and did the whole thing in no time at all, here we are: 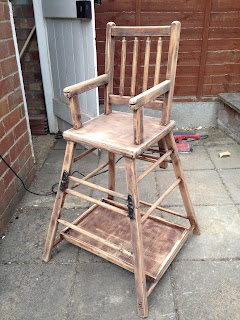 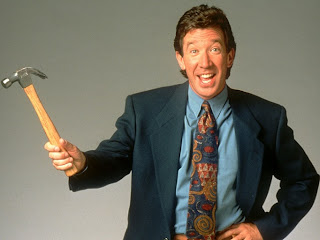 Next we brought some gloss paint in a bright red colour, Cardinal Red, by Rust-oleum, and covered the whole thing in 2 coats and let that dry. Finally I screwed it back together, added in a harness and some restraints we brought from Mothercare (one of which has since broke, thanks Mothercare!). Lucy cut out some oilcloth (wipe down things are good for kids, apparently they are messy eaters?) to fit onto the tray. And that’s it! Pretty much all done! It’s pretty neat in the way that it unclips and folds over and makes a little seat and tray so he can do drawings and art work and other stuff on as well. What do you think? I asked Gruffalo to kindly model the chair for you, what a gent, it's not true what they say about him you know. 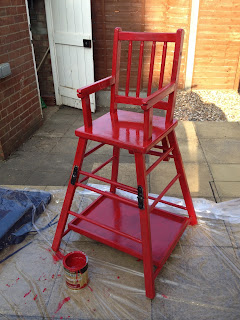 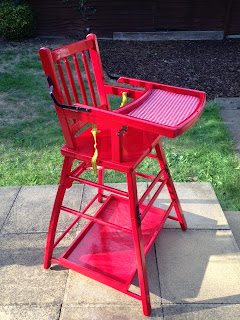 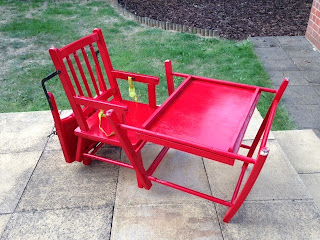 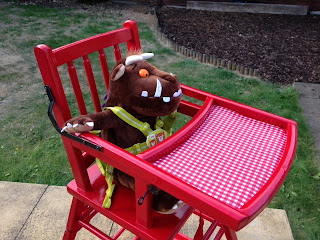 Next up we had a little chair to sit on. He probably won’t need this for a while but what the hell, I’m Nesting so TOOL TIME! I sanded this down as well and OH HELLO MR RED PAINT! That got 2 coats as well, I’m slapping red paint around like it’s going out of fashion. If I can’t paint the town red much anymore I’m at least going to do a chair. There is a story behind this, Lucy had this chair in her lower school when she was little, and it had to shut down (nothing to do with Lucy). The school said to all the kids that they could take their chairs with them, and she has kept it ever since and grown up with it. Family heirloom! So now Albert will use it as well! (then we'll go on Antiques Roadshow with it) Here is the chair below. Could also be used for some fort building or climbing frame for Batman. 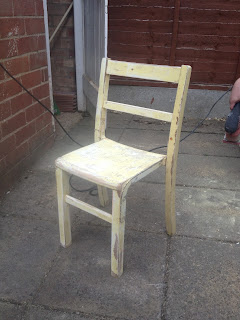 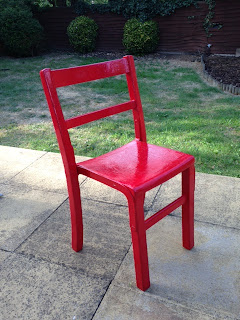 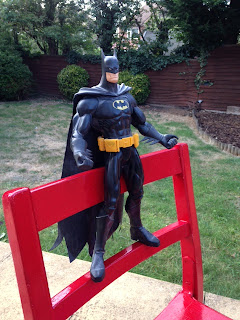 The other tasks on the list were not quite as fun. We have some garden furniture which was looking a little worn after 2 years outside, so why not, TOOL TIME! I sanded these down (Man that took longer than expected) and whacked on a coat of some outdoor Willow paint by Cuprinol. It’s for sheds so we are hoping it will weather well, and we got a huge cover for it (which is cool as when it's on it looks like we have a Hot-tub). Now we can enjoy outside time a bit more IN STYLE. While I was sanding this I noticed that turned on its side, it makes an excellent shield defence barrier. Will be useful when Albert and I are playing water pistol soldiers in the garden (as modelled by me, with NERF and in my pyjamas). 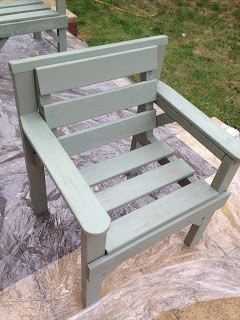 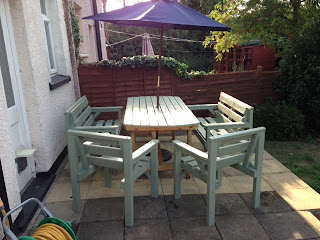 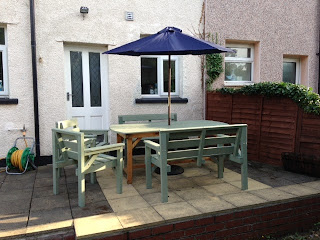 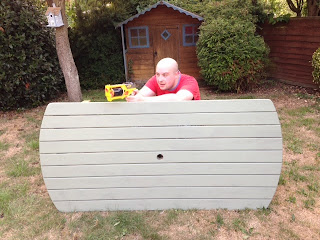 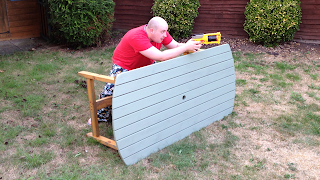 While I was outside I also painted the fence round the garden, cleaned out the shed, took some bits to the dump, basically revamped everything I could see and get my paint-covered hands on. Lucy and I made some wooden bunting for the shed (again with Cuprinol, you can read about it HERE on Lucy's blog). The front garden needed completely weeding and new plants set up which took a fair few trips to Homebase. While there we also found this little chap, seems our dragon was pregnant as well! 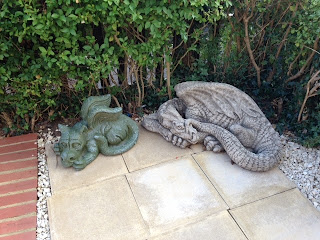 Back indoors, TOOL TIME! Lucy had split some nail varnish remover on some drawers. That stuff removes more than nail varnish I can tell you. If you happen to spill it then it removes time and space from the universe itself! So I sanded down the top of the drawers and painted that as well with some old brown fence paint I found. Hmm, sort of a good match? Better than a big white stain on it (Ahem). I might do the drawer fronts as well to make it match in an odd way, what do you think? 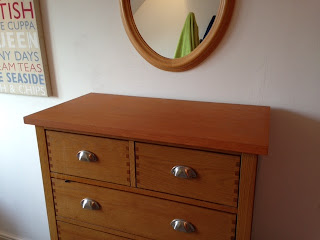 Anyway, as previously mentioned HERE, I needed to Nest a bit for myself as well, so TOOL TIME!, I drilled some holes in the wall and banged up this bad boy. Purely for adults although we might have Ribena in one when the Bombay runs out. 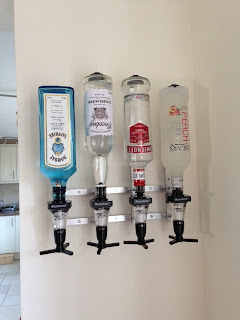 I think that’s about it for my Man-Nesting. There were loads of other little jobs, but unfortunately not many of them involved hammers. Anyone else found themselves Nesting like mad and starting any projects?
Posted by Liam Bishop at 14:08