The Stages of Pregnancy (and other chat-chit)

As I type this we are still awaiting Albert’s arrival, he is due on the 18th August, so we are counting the days (and long peaceful nights) until he is here. He is wriggling around in the bump waiting to get ready to emerge! The midwife has said it won’t be long until he is engaged. Just to be clear, when the baby becomes engaged this means he has jammed his head down between the hips as he is getting ready to come out, not that he is getting engaged to get married. When Lucy told me he wasn’t engaged yet I thought “He hasn’t even been born yet, I would think it will be at least 20 years before he is engaged and married!”

So I thought why we are waiting for Lucy to drop, then I would write a bit about some of my experiences of the different stages during the pregnancy.

I suppose the whole pregnancy experience starts when you find out that you are pregnant (It obviously starts before then but that’s just humping, no need to explain that). For us this came in the form of Lucy weeing onto some expensive plastic, which then says YES, YOU ARE PREGNANT! WELL DONE! We were trying (and expecting) to have a baby anyway, so although it was expected, it was still an amazing moment. I bloody loved that wee soaked plastic stick! I will always remember the feeling of overwhelming joy that came over me, genuinely overwhelming. It was like going on the Nemesis at Alton Towers, but 100 times better. I am going to be a dad! My balls work! I love my wife! That feeling has stayed me with ever since, always there under the surface, bubbling away like some magic cauldron making me happy, and basically not making me give as much of a shit about other stuff that now just seems trivial. To want something that bad and then find out you are getting it with the woman you love in 9 months, bring it on!

Here is the stick of joy: 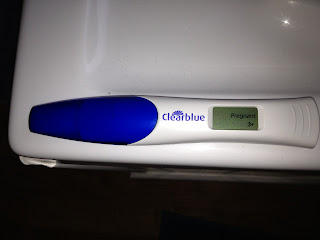 So you are pregnant, well done! It does mean you can’t really tell anyone for a few months though so have to keep it secret (like Fight Club), and there aren’t really any symptoms so after the initial rush, the excitement slows down (only a little). We were lucky in that Lucy had no morning sickness, and didn’t smoke or drink so there wasn’t a big change for us. But you just want to get it out there! 9 months seems an eternity.

So then a few months later you get to tell everyone! Cue that excitement all over again as you relive the moment with the wee covered plastic and all you family and friend’s share it with you. Something that struck me was how happy everyone was for us, babies make people happy! It’s like a drug, but free! And that in turn makes you happy that people are happy for you. It’s a never ending wheel of happiness. An Ouroborus of happiness. (Lucy wouldn’t have Ouroborus as a name choice). It has genuinely touched me all the way through the pregnancy how kind and generous people have been, I could never thank everyone I know enough for everything they have done. I can only hope Albert grows up, wins the Formula 1 World Championship, becomes a millionaire and so can afford to buy everyone a house to say thank you.

The Scan – We had a few scans and to me they were always tense and exciting. Tense because you want to make sure the baby is all ok (which he always was). And tense because as a man, and I understand why they do this, a few times I just had to sit behind a curtain and wait to hear news and not know or understand what's happening, which can be hard. But then that leads to excitement, as we find out he is all ok, and a big sense of relief (cue cheers). Every moment you get to hear the heartbeat is really special (I want it as my ringtone, or failing that, I think a baby’s heartbeart would make an excellent backing track at a rave), but to be honest the first few scans where you see the baby it just looks like a big moving splodge, like a magic eye but on television. It’s great because it’s your baby! But you can’t see much. The final scan is much better, you can see a head! You let out a big sigh, thank fuck it has a head. It has legs! 2 legs, get in! We decided to find out whether it was a boy or a girl, and I’m glad we did. Even if we didn’t, Albert obliged us by spreading his legs and showing us his private parts right there on screen, so there was no doubt. If it turns out to be a girl, then she is likely to have a very rude looking leg.

Baby Albert and his glorious splodginess! 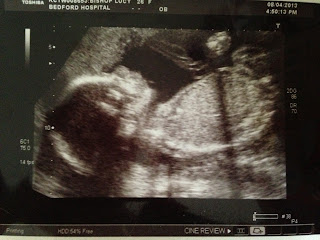 So the next step after that is the antenatal classes, and not anti-natal. If you are anti the whole natal thing then these classes are not for you. Antenatal means occurring before birth, so it’s a good idea to do these before the birth, and not after. I found them pretty handy, I found out a lot of info about the birth that I didn’t know and that I thought would be helpful. And a few things that we didn’t really want to know about, and I don’t want to google it as the images will probably be like something out of a Saw movie. It’s something like an epitipotomus (I think it rhymed with hippopotamus, I had almost passed out by then so I don’t recall), and let’s just say there was some wincing at that. The word vagina is used about 500 times an hour so if I wasn’t totally desensitized to it, I am now. I must admit that I sniggered a few times and things that were probably not meant to be funny, but I think a few of the other dads did as well, probably because we all knew we wouldn’t ever have to have an hippopotamus. And I’m sorry but the word anus is funny, I will never stop laughing when someone says it out loud with a straight face. But in the end you get tea and biscuits so that helps the learning process, and I would say I definitely feel more knowledgeable about the birth and baby. We also had a tour of the ward, but there was no screaming at the time, so that helped.

So that leads us up to now! The bump is mahoosive (see last post) It’s like it almost has its own gravitational pull. The midwife has said it’s a normal size though, but I guessed that you don’t see too many 9 months pregnant women walking about, so you don’t always realise how big the bump gets. Lucy feels Albert kicking all the time, which reassures us. I like the kicking, as a father I obviously don’t carry him so it feels like that’s the main contact I have with him so far, and so that has been the start of our bond (I like to put my head right there and hum the Jurassic Park theme tune as well to him, all the time, I am not sure how that’s helping my bond with Lucy though). I don't really know how to describe the kicking, it obviously feels different for Lucy than it does for me as she is feeling it from the inside and I'm not. It feels like a bit like having your hand on a drum, and then someone banging it from the other side (if you can imagine that). If you really want to know then find a pregnant woman and just ask to touch the bump (They probably won't mind, it's amazing how many people want to touch the bump so they have probably had hundreds of people touch it that day already) We can also see him moving about in there, which quite frankly is a bit weird. It’s a bit like in the film Alien when you see it moving under the skin. It’s just as scary, but with a lot more love.

Cravings - There hasn’t been too many cravings on Lucy’s side, so there haven’t really been any late night trips to Tesco for rice cakes or car polish or the smell of Tupperware any other weird craving thing. I on the other hand have had sympathy cravings of McDonalds, ice cream, chocolate, Skylanders, my kindle, pillows, diet coke, pies and gravy, but Lucy has been very understanding.

We have been lucky that we haven’t had too many other symptoms. One of the symptoms is a fake contraction called a Branson Hicks or something, I call it a Branston Pickle contraction, but that just makes me think of cravings again. Lucy hasn’t had any of these fake ones yet, so the first time she has them (the real deal contractions, the ‘marmite’ ones), that will mean we are into labour! Looking at a list of all the possible symptoms you could have just makes it look like the woman is dying, rather than carrying a baby, so I feel lucky Lucy has been fairly free of them for the past 9 months.

Oh apart from the weeing. The weeing is endless. There is a never ending supply of wee. It seems a pregnant women can’t go 20 seconds without needing a wee, but I understand this is normal. The baby likes to use the bladder as a kind of waterbed, or a squishy toy. It seems like Lucy gets up 4-5 times a night to wee, which I don’t mind as if you gotta go, then you gotta go, it’s better than wetting the bed, and it’s only fair if Lucy gets up then I don’t mind getting up as well. We have a pregnancy cushion in bed as well, which is like sharing a bed with an Anaconda. We will definitely keep this after Albert is born, because I think it would help to make an excellent fort in bed. 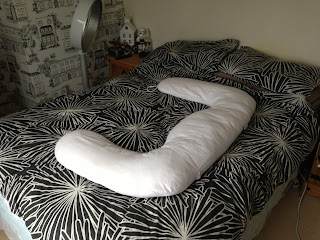 That’s about it for now! I haven’t written anything about the nursery/nesting, baby clothes and baby stuff as there is more to write on that in the future. Oh and toys, expect a lot of posts on toys. Babies love Scalectrix!