Bath-time and other baby hygeine/grooming.


So my lovely wife and I decided we would give Albert a bath last night, not the first bath he’s ever had, we’ve already passed that milestone in a scream-fuelled-fury that was recorded in its entirety, ready to be played on a big screen at his 18th birthday party. This was about his 3rd/4th bath now, so I thought I would do a post on bath time! And then a bit on baby hygiene and grooming, which isn’t as splashy or fun as bath time, but is useful none the less.

Albert being told he needs to take a bath. "You WHAT?" 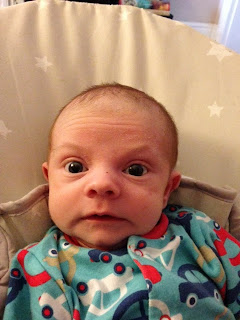 Baby hygiene is pretty important, and it covers a wide range of things you can do to smarten them up. And basically you don’t want your little one getting ill, as then they’ll be crying, puking and pooing more than normal and no sane parent could stand the drama. So we are doing all we can to protect him from dirt/germs/illness and keep him nice and clean and presentable. I wanted to bath him in anti-septic fluid and keep him in an air-tight plastic sheet so he would never get ill (a la Howard Hughes or Bubble Boy) but a few people said this wasn’t necessary, and some Google-searches have confirmed this. So onto bath time! (with normal water)

Bubble Boy and Howard Hughes, not sensible ways to deal with hygeine for normal people: 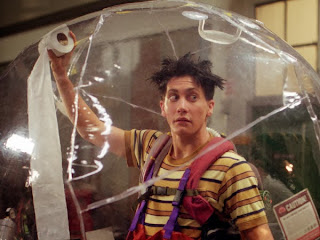 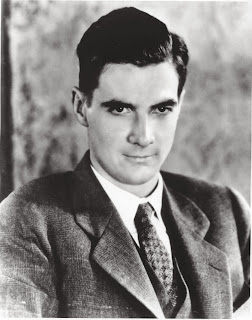 So I previously mentioned HERE in a post about baby equipment, that we have a baby bath. This is just a plastic washing basket without the holes, that looks like a reclaimed giant turtle shell, that you put upside down in the bath. It’s much better than using the whole bath, the sink or the toilet to bath your baby in.

ADVICE! Bath your baby in this: 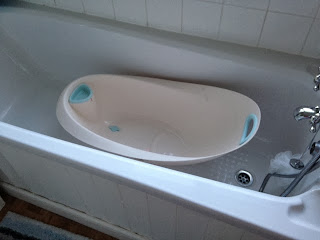 WARNING! Don't bath your baby in these: 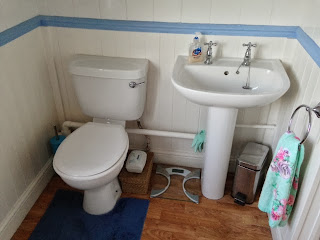 So basically baby bathing is like normal adult human bathing, you put a little bit of water in there and then you wash in it! We adopted the ‘Small amount of water and holding the baby in with his head above the waterline’ method of washing, and then used a sponge to lightly scrub him all over, being careful not to get water gushing into his eyes and down his throat. Babies are pretty small, so it doesn’t really take very long to wash them all over, but I can tell you that he did not like it one little bit! I have been reading that newborn babies are not often fond of bath time (like students and hippies), and he sure lived up to that warning. He cried the whole time! We paid special washing attention to the ears and the nappy area, as this is where you are most likely to find congealed bodily fluid, but on the whole we washed him all over and got him nice and clean and sparkly. It’s like a game, get him in there and get him washed before your ears bleed with the crying.


We used a Johnson’s baby shampoo and bath wash (this one HERE), which is excellent. It's a bit like normal adult shampoo but doesn’t burn your eyes so is safe for babies. Albert seems to like it! No Head & Shoulders needed yet as he is dandruff free so far.

They wash with this: 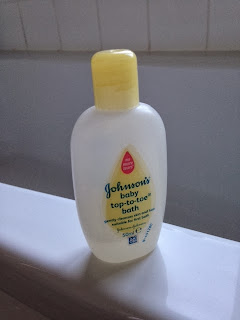 I think the reason why newborns don’t like washing is that it’s probably weird not being able to understand water and have no control of being in the bath - your life is in someone else’s hands. I think if I couldn’t control my arms or legs, and a 25ft giant person was holding me just above the waterline and washing me with a sponge bigger than my own head, then I would probably cry as well. As they get a bit older and start to be able to sit up and control themselves a little better, bath time gets more fun, mostly because of... TOYS. 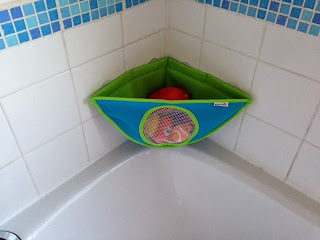 At the moment he isn’t quite up to using toys (which like I said, is kind of the point of bath-time to be fair), but he has a fair few already, including a rubber duck! (As mentioned HERE that I wanted one) We actually have 2, a Luton Town FC one (We aren’t football fans so several friends are using the early bribe method to get him to support their teams, which is fair game) and one that tells you when it’s too hot by going bright white (Or melting if it’s REALLY hot). 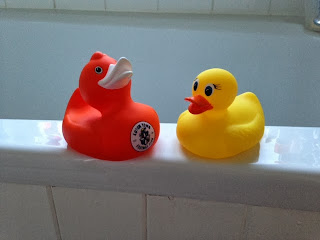 He has some other toys as well that he isn’t old enough to use yet, and so purely for educational purposes, I have road-tested them (Bath-tested?) so I know if they are suitable or not. As per the below picture, these little rubber things squirt water! There is a Whale (Squirts out the blow-hole, anatomically correct), an Octopus (doesn’t squirt ink as standard, not anatomically correct), a Turtle (Do turtles squirt water? Maybe Blastoise from Pokemon), and a Nemo fish (May or may not squirt water out their mouths, it never came up in the Pixar film).

The 4 bringers of the water Apocalypse: 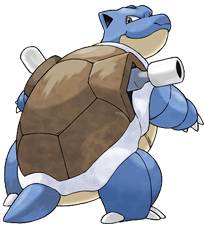 I can say that although they look like toys, these are NOT for children. I was in the bath when I tested them (For maximum scientific accuracy) when I filled one up and squirted it - it shot out across the bathroom and hit the toilet! The range is incredible! This is definitely a toy for adults unless you want water all over you and the bathroom floor during bath-time. I could easily squirt it and hit the ceiling (which I did). I could do it with accuracy too, I could shoot it across the bathroom into the shower cubicle and hit specific tiles. I even opened the window and squirted it across the garden, I could get it 15 feet easily, probably way more!! What an excellent toy, well worth having a wash for.

This is the view out my bathroom window from sitting in the bath. X marks the spot! (That the water squirters can hit): 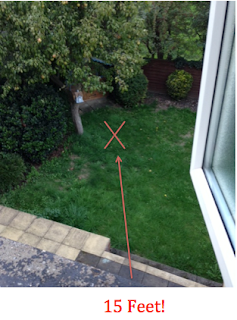 As I said, hygiene is important :)


Once he is all washed and clean, we have a little towel with a hood to dry him off, then he is all dry and bath time is done! I think this is his favourite bit! Probably because he isn’t all wet and scared of being dunked under at any moment. Oh I say bath-time is done, it is for Albert. He goes off to sleep and Daddy has to clean up all the water everywhere after all the splashing.


So once Albert has had a bath, he needs some grooming if he is going out on the town and is aiming to impress by scrubbing up. One thing that has surprised me is baby nails. Holy sh*t baby nails grow fast and are sharp! My baby is basically Wolverine. When he windmills his arms about when having a tantrum he can quite easily scratch you on the chin, or worse, scratch himself. We have mittens for him to stop him doing it, called ‘Scratch Mitts’, which are basically boxing gloves for babies. But he tends to just fling these off after a while, so we don’t use them a lot and just aim to keep his nails short and less like weapons. To do this we have a tiny little pair of nail clippers (A ‘pair’ of clippers, is that right? We only have one of them. Is it a set of nail clippers? What is the group term for nail clippers anyway??) to cut his nails with. Lucy and I once had a very disturbing moment trying to cut the cat’s nails, so we were very wary about doing this ourselves, so we got Nanny to do it instead. And since then we have filed them down instead of using the clippers, which is quicker, easier, safer and he likes it more. 5 weeks old and he is already having manicures (So not quite like Wolverine).

My baby is basically this: 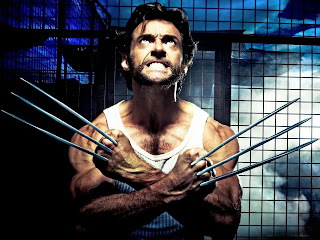 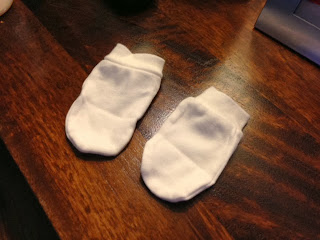 Once he has washed, played with toys in the bath and had his nails done, then he can comb his hair using a little baby brush (A lot of ‘baby’ things are just adult things, but smaller). He is already losing some hair like his dad, must be all the stress of washing! He doesn’t have teeth yet so he can skip a toothbrush and toothpaste (Probably something that most children carry on doing until they reach puberty and they realise nobody wants to kiss anyone with bad breath). Oh one last thing Albert, we almost forgot your bogies! I said HERE about the mythical Pump That Sucks Bogies And Snot Out Of Your Nose. Well here it is. Looks like a miniature hot air balloon/funky psychedelic dreidel/poisonous underwater blowfish Pokemon. It sucks bogies right out! You can’t shoot them 15 feet though, so it isn’t as good a toy as the animal blowers.

Pump That Sucks Bogies And Snot Out Of Your Nose: 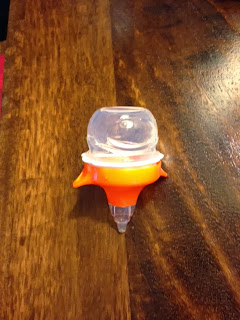 Once all this is done, the baby is clean! Like I said before HERE, babies only really do 5 things, and going to the gym isn’t one of them, so they don’t really get sweaty, ergo they don’t need a bath every day. We have been washing him every week or so in the full bath, and in-between with wipes. Babies do however like to poo themselves and throw up into their own ears, so washing is definitely required at certain times, but let’s be honest, we have all at one point in our lives gone a week without a wash, then pooed ourselves, thrown up into our laps, and rather than have a bath, have just wiped themselves down with a wet wipe and put a clean t-shirt on. And if you haven’t, then you obviously haven’t lived (or been a university student).


That’s about it for hygiene. It has to be said, even before a wash - baby smell is amazing. I have never really smelled a baby before, mainly because smelling random babies on the street is highly frowned upon. I don’t know whether it’s because Albert is mine or not, but his head smells fantastic. It immediately calms me down. For the first few weeks I couldn’t smell anything on him (Other than biscuits, as mentioned HERE), but Lucy kept raving about the smell of his head, so I just thought she was losing it and humoured her. But then after a few weeks I began to smell it on him, and now I can’t get enough, it’s like crack. I am addicted to smelling my baby’s head. I am going to email Febreze and get them to do some tests on it, because if they can bottle it they’ll make millions selling it. I’m still not sure whether other newborn baby’s heads smell, so I don’t know whether this is a genetic thing between parent and baby, or know anything of the science behind it, but I hope it lasts! (Smelling most teenagers, it would seem not). Anyone know why this is? 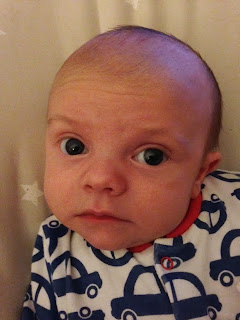 Anyone else with any fun bath-time stories?
Posted by Liam Bishop at 14:53