Long time no see, how are you? Good! I have quite a long post coming up that I have been writing on and off for a bit, but it’s been a while since my last post so I thought I would drop in and say Hi and let you know that we are all still alive and doing well.

So what have Albert and I been up to? Mainly pooing, sleeping and puking (that’s the both of us). But the other day, we went swimming for the first time! SPLASHDOWN BABY!

I want to try and be there for all of Albert’s firsts: eating solids, eating ice cream, walking, speaking, riding the cat like a horse. I want to see all of those things the first time he does them. Unfortunately I have to go to work (boo!) so I know that inevitably I will miss some of them (hopefully not the riding the cat one, that’s going to be amazing). So I was glad that on Lucy’s birthday, I took a day off and we decided we would go swimming for the first time with the little one! In my head this would be exactly like the Nevermind album cover by Nirvana. Experiences should always be based on what people see on album covers right? 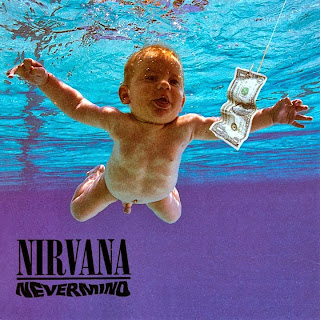 We have a local pool, but having been there recently, we decided we would rather go somewhere that wasn’t full of wee as we didn’t want to catch any diseases, so would rather go somewhere where they actually decided to clean their facilities. In the end we went to the Saxon Centre in Biggleswade. We wanted somewhere with a little baby pool as Albert isn’t ready to do lengths yet (or even widths, he's pretty small).

I haven’t been to a pool for years, but it’s good to see they are exactly the same as they have always been. Same changing room with the wet floor you hope is pool water and not wee, same tiny lockers that are actually like the Tardis when you open them up, same scramble through your pockets going I HAVENT GOT A 50P FOR THE BLOODY LOCKER! and same locker keys that fix round your wrist like a shit Casio watch, that you can flick the key out and pretend you are Wolverine.

We went into a baby changing room which was another first for me, it was nice to get changed with some actual room to move, and a bench so your pants don’t get wet when you drop them by accident on the floor (nobody needs damp pants in their life). We had some special waterproof nappies to put Albert in, which are basically normal nappies, but with a plastic bag built in. And for trunks we had some cute little Nemo shorts for him. My Nemo shorts were too small for me now, so I have tropical beach ones like I’m on holiday in Cyprus. Classy! 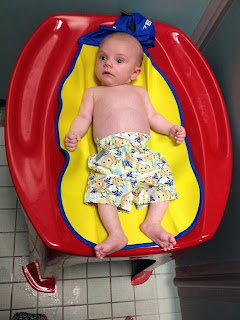 Normally whenever Albert gets wet, he cries (eg Bathtime, milk spilling out the bottle onto his face, laying down on his back and sneezing so the snot falls back into his eye etc), so we weren’t sure how he would react when he got into the pool. Lucy held him and we slowly walked down the steps into the baby pool. It was colder than I thought it would be, and when his legs touched the water he started to cry, but as soon as he got his shoulders under he was fine, he was loving swimming! (or floating as he was mainly doing).

We played around for a bit and he actually had a smile for a bit (he was probably weeing, or farting and laughing at the bubbles). We eventually went for ‘The Dunk’. We just dunked him under and brought him up again, like a Digestive into tea, and again he loved it! Apparently babies can block off their noses or something like that, so putting them under water like that means they won’t drown straight away, so it was ok to do it. Anyway, he was fine with it so we carried on dunking our little biscuit man.

Then with a flagrant disregard for the rules, I ran out the pool and got my camera phone to take some snaps like a rebel. I even managed a video of a Dunk, however that old Never Work With Animals Or Children rule came back, and the one time we recorded him being dunked, was the one time he cried. Oops. 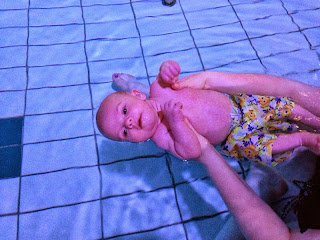 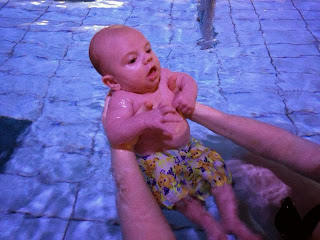 At the pool there was also a tube water slide, but apparently newborn babies can’t go down water slides. Missed opportunity.

After about 20 minutes his bottom lip started going and he was getting a bit cold, so we wrapped him up in a Shark Poncho (again, children get all the best clothes and accessories, I want a Shark Poncho!) dried him off, and that was about it for the swimming trip. I am pretty glad there was no pooing done in the pool, I didn’t trust that nappy. 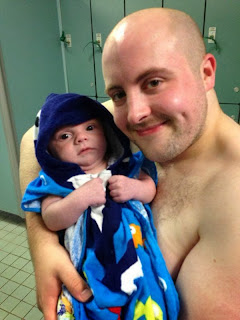 Considering the size of his feet, I don’t think it will be the last time he goes in a pool, we are expecting him to be an Olympic champion! Since going swimming, Albert has actually been a lot better in the bath, so he is getting used to water now. I can see Finding Nemo being a favourite in years to come.

Anyone else had any good experiences swimming for the first time?
Posted by Liam Bishop at 03:52