Well we are into the New Year already! I’ve had such a busy Christmas/New Year/first few weeks back at work that I haven’t had much time to sit back and reflect on it all, and certainly not time to write anything! Anyway, I hope you all had a good few weeks and enjoyed the hols. Now, let’s crack on with 2014 and make it a good one! Happy New Year from Albert and I! 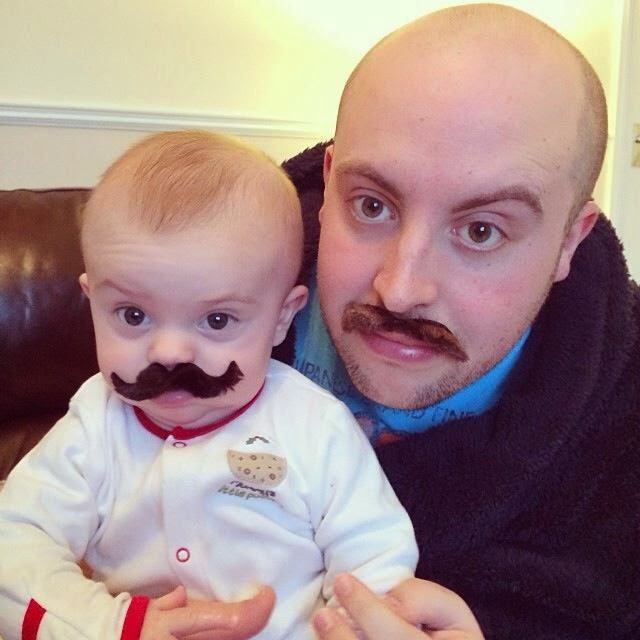 So recently, one of my friends at work announced that him and his fiancée were expecting a little one of their own! (A baby, just to be clear). While passing on my congratulations and welcoming him into the dad club, he asked me if I had any advice. 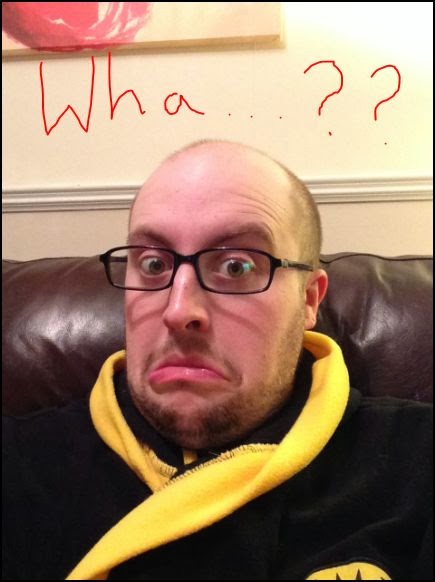 Me? I have been a dad for almost 5 months now, I certainly don’t think of myself as experienced. Anyway, wanting to help I thought about advice for new dads, and to be honest everyone always says the same things. Get rest, learn how to hoover, spend time with them, don’t drop them on their heads etc. There are a hundred lists out there like it, and they all pretty much say the same thing. So I thought about all the little things that I would have liked to have been told beforehand, and put this together. 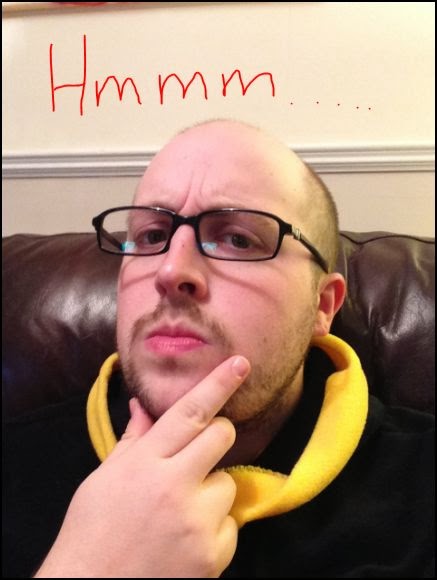 So here we are:

15 Alternative Tips For Being A New Dad (Or Things I Wished People Had Told Me)
1. Take Proper Food To The Birth

I’ll start with the birth, as most parenthoods do. Loads to say, but my main point of advice is this. People always say to take food, so we did what I imagine most people do. They take crisps and chocolate and cereal bars. WRONG. It’s good to take some of this, but when you have been stuck in the same room for 48 hours with no sunlight and no fresh air, eating nothing but crisps, you’ll want something more substantial. Make a sandwich or a long baguette you can eat sections of. Take a pork pie. Take a banana (or a bunch of them). Make a salad or rice dish to take. Fair enough there will be a cafe there in the hospital, but in years to come you don’t want to have to say you missed the birth of your child because you were desperate to demolish a Steak and Kidney Pie. I say if you are hanging about at home once mummy goes into labour, unless you can see the head coming out there and then, you have the time to make a ham sandwich to take with you.

This is a banana. Use it! 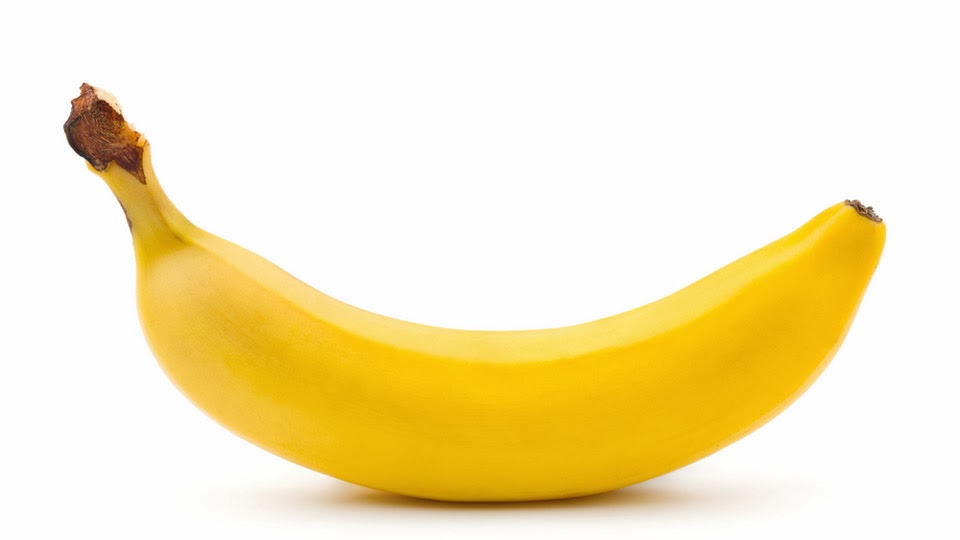 2. Check Doing Up The Baby Seat Properly Before Going To Collect The Baby

This sounds pretty obvious but it’s worth taking some time (not just 10 minutes) to really get the process down. Learn not just how to do it, but how to do it smoothly. After 35 minutes of struggling by yourself with an empty car seat and then saying “F*ck it, that’ll do”, you won’t feel the same when you have your newborn strapped in there, and it’s cold and raining in the hospital car park, and you’re trying not to shake the seat up like an earthquake and wake them up. You’ll wish you spent more time learning how it’s done smoothly.

3. Learn To Do Things With Your Off-Hand/One-Handed

By this I mean if you are right handed, learn to do things with your left, and vice versa. Learn to do things one handed. A lot of the time you’ll be holding a baby or feeding them or rocking them, and you won’t have 2 available hands to do things with. Practise texting and using your phone with one hand, the one that you don’t normally use, it’s hard! (Most people at least use their other hand to steady the phone when texting, even subconsciously). If you are right handed, how often have you drank a cup of coffee with your left hand while holding a sleeping baby? Practise beforehand, as you won’t want to spill scalding hot coffee all over their head. Even using a remote control with your other hand is pretty difficult.

Things to learn how to do one handed: 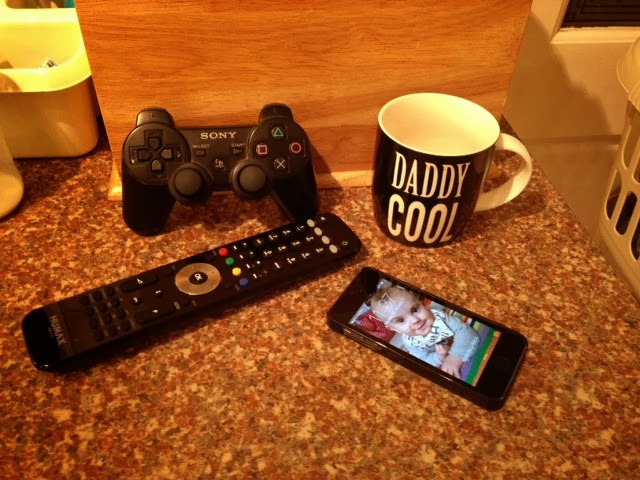 4. Smell From Far Away And Move In

You see almost everyone doing it. “Has the baby pooed?” Then whoever is holding them lifts up the baby and smells their bum. WRONG. The first time I did this, he had pooed, I stuck my face right up to it and smelled, and I got a full blown stink right in the nose. It was like being punched in the face by a shit-fist. A good technique is hold the bum about a foot away from your face, then start smelling, then slowly move the bum towards your nose. You can tell if they have pooed from a couple of inches away, well before your nose gets too close to it. If you are gagging, you’re too close.

The correct way to smell for a poo: 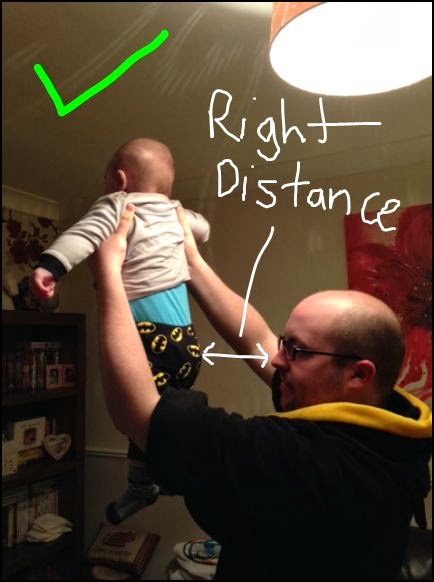 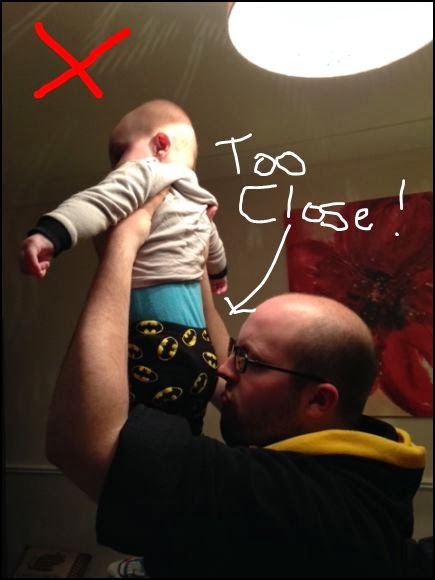 Babies love white noise. It must remind them of being in the womb (hmmmm comfy). Get a white noise app for your phone, as just putting one of these on can calm your baby and get them to sleep really quickly. I have also found that a regular bum-pat works really well. When I hold Albert I just rhythmically tap his bum and it calms him (normally to the beat of a dripping tap, as if you’ve just sat down you won’t want to be bothered to get up again to turn it off. Use it like a metronome. Or failing that, get really good at making sure you turn your taps off.)

6. Cut The Corner Off The Milk Carton Correctly

This is only likely to be a mistake you make once or twice, but if done wrong then milk squirts everywhere, and you don’t want to be covered in milk, and have it all over the kitchen side and dripping down your cupboard door and having the cat licking it up off the floor when you have a screaming baby right there. Basically if you are using milk from a carton, snip the corner RIGHT OFF rather than leave a bit attached. The cartons are normally really full up, so if you only snip half way, then the corner acts like a reverse chute and changes the direction of the milk, making it go everywhere. See pictures to illustrate.

The correct way to cut a milk carton: 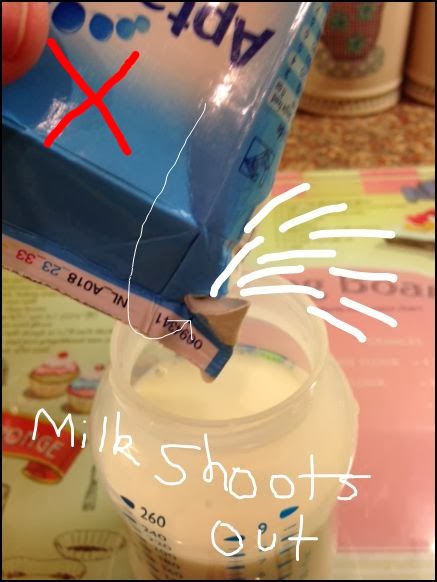 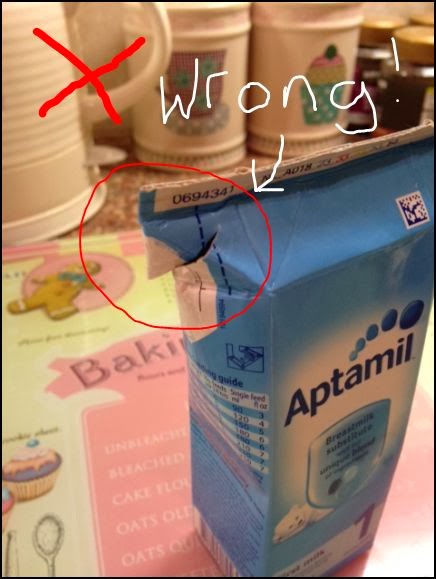 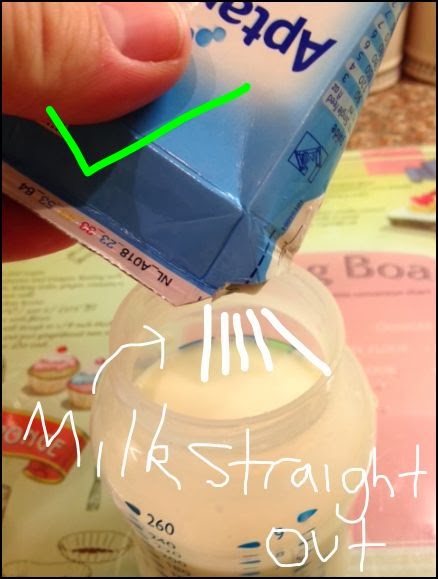 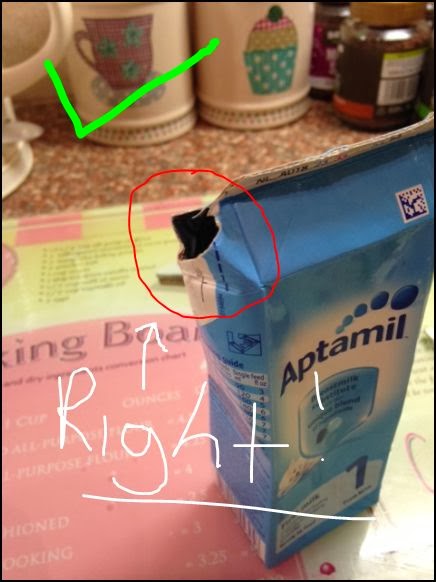 7. Don’t Point The Bottle At The Baby When You Take The Lid Off

Sometimes when you put the lid on the baby bottle, something happens with the pressure on the inside (Science Happens!) and when you take the lid off, the pressure equalises and milk sprays out. The other day I had this pointing directly at Bert’s face and took the lid off, milk squirted out all over his face. Which he didn’t like. He cried. Always take the lid off with the bottle pointing upwards so air can get in and stop you making a mess.

The correct way to take the lid off a milk bottle: 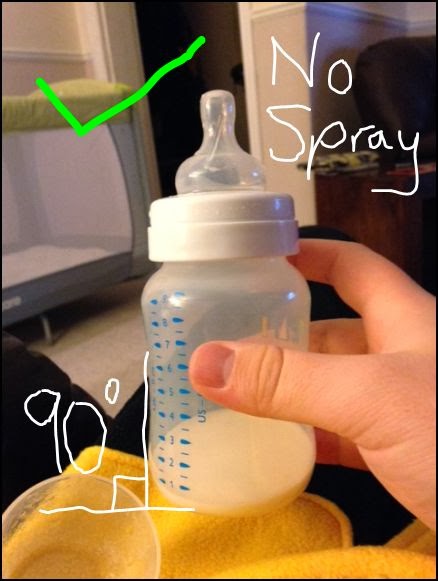 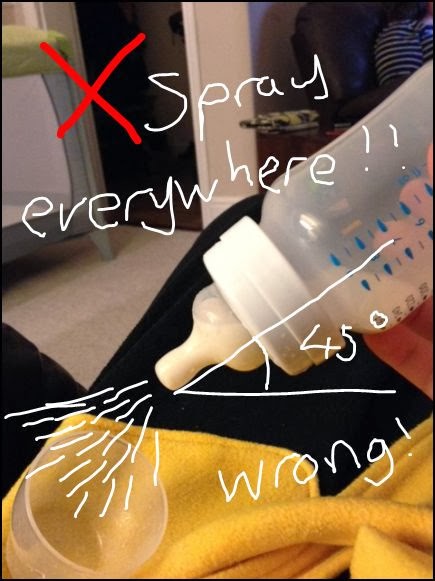 8. Use A Muslin As A Poo Bandana

Baby poo smells. Sometimes it REALLY smells. People say it’s not as bad when it’s your own. That may be the case, I don’t know, I haven’t gone around smelling other baby’s poo and doing comparisons on Excel spreadsheets (yet). But it’s still awful. I like to use a spare muslin as a bandana around my nose to hide the smell. If you have Olbus Oil or aftershave then put a few drops on to help hide the stink even more. Roll it up for extra thickness, and then tie it off. 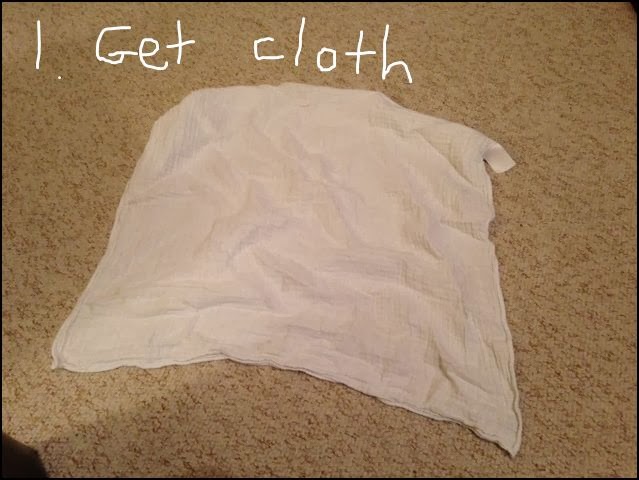 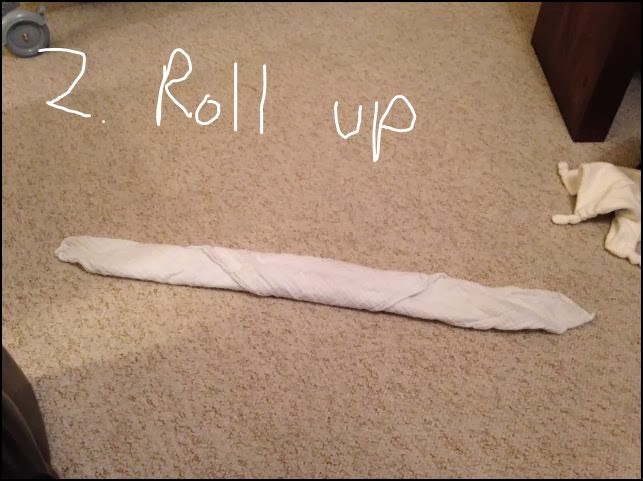 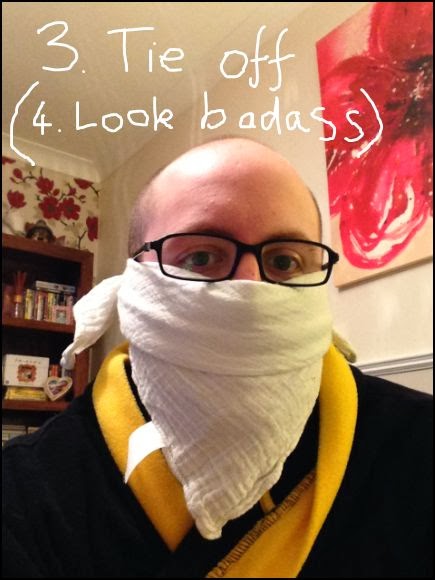 Claws? By that I mean nails. You can get baby nail clippers, so use them often. Nobody really mentioned this to me, but a baby’s nails grow really fast, and they are really sharp. They scratch you, but worse of all, with their flailing arms and not being in control, they often cut their own faces. They are like a drunk Wolverine but without the healing factor. 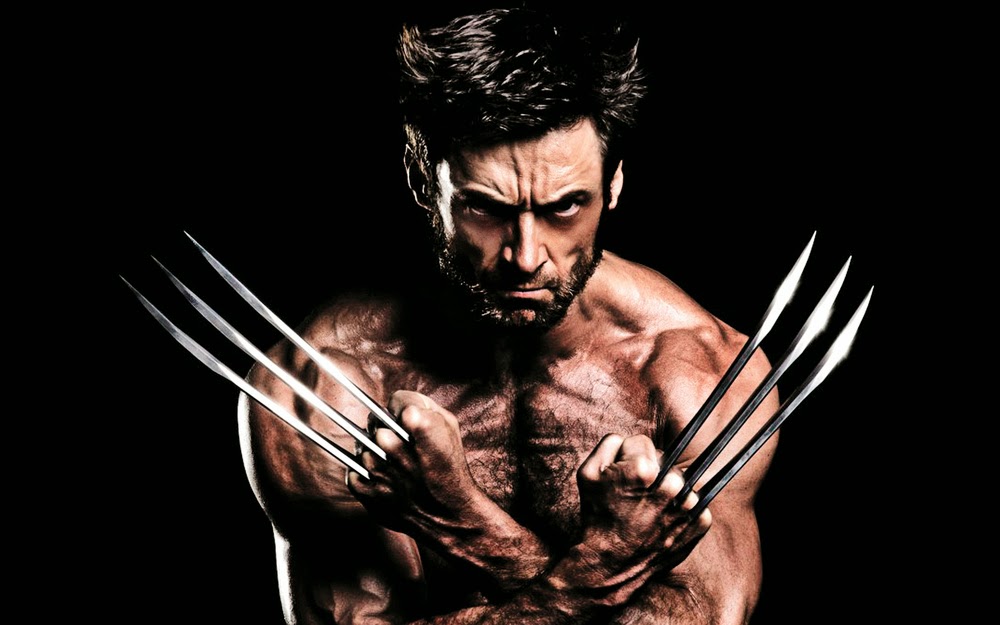 11. Familiarise Yourself With Shopping

You may come across a time when you are sent out to buy nappies (known as The Quest). Fair enough there is a section in Tesco for nappies, but in this section there are approximately 8 million different types of nappies, and the aisle is 3 kilometres long. Most of them are by the same company. What is the difference between all these nappies? I don’t think anyone knows. There are normal nappies, active fit nappies, super dry nappies, easy up nappies, sleeptime nappies, sensitive nappies, simply dry nappies, large nappies, small nappies, glow in the dark nappies, nappies with built in iPods, nappies that automatically post on facebook whenever they detect a wee. There are even nappies for newborns. Aren’t all babies newborn?? All you should know is, you need to buy the right ones. If you have to get milk, there is also 8 million types of milk. It’s best to find out SPECIFICALLY what type of milk you need before you go. Take a picture of what you have at home so you can identify it in Tesco. Just going shopping for nappies and milk won’t help, nor will looking at it beforehand and remembering that it is the blue packet. They are all blue!

A baby is pre-programmed to be sick on you at certain times of day. During dinner, just after you wash etc. One of these times is also just before you are about to go out. There is a high chance you’ll spend at least some of your day smelling like sick or poo or wee, so get something to hide the smell if you need to go out quickly. Sometimes (always) you’ll be in a rush and if it comes down to skipping something to make some extra time, you might decide to skip a shower, so aftershave can help here as well. 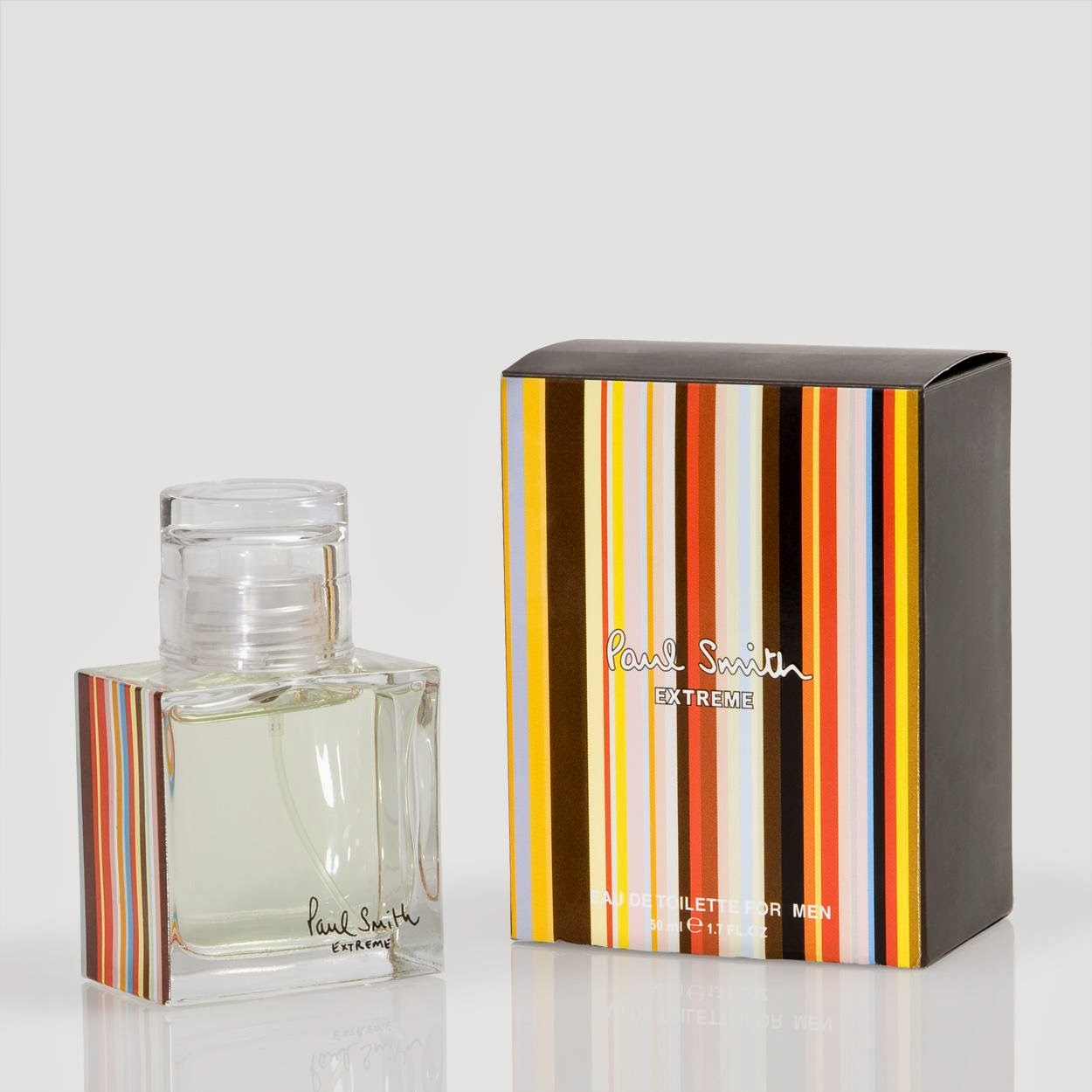 Nightlights are great. To be honest, when your baby goes to sleep, you’ll want to check on them every 6 seconds to make sure they are ok/haven’t flipped over/got their head stuck in the crib bar/fallen into a coma/been eaten by the cat/turned into a werewolf etc. You can’t have the bedroom light on all night, so a nightlight is good for getting the right ambient light so you can sleep, but also still see. 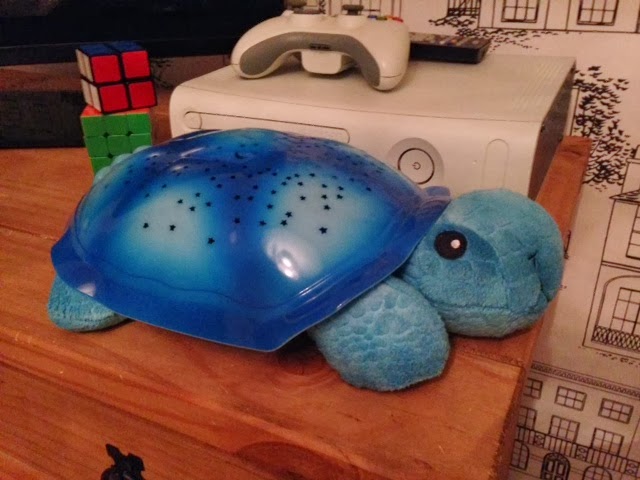 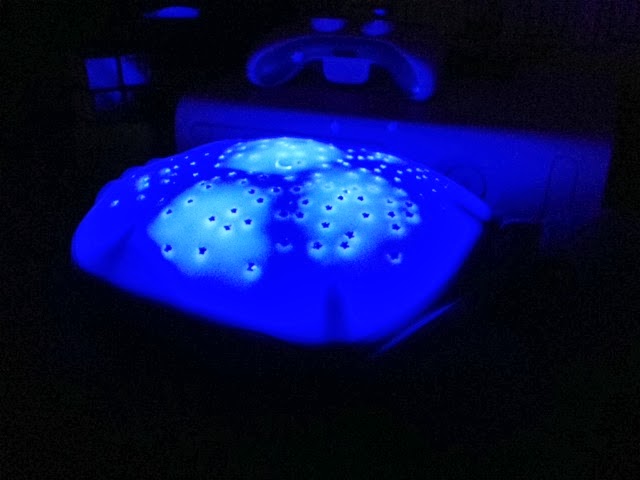 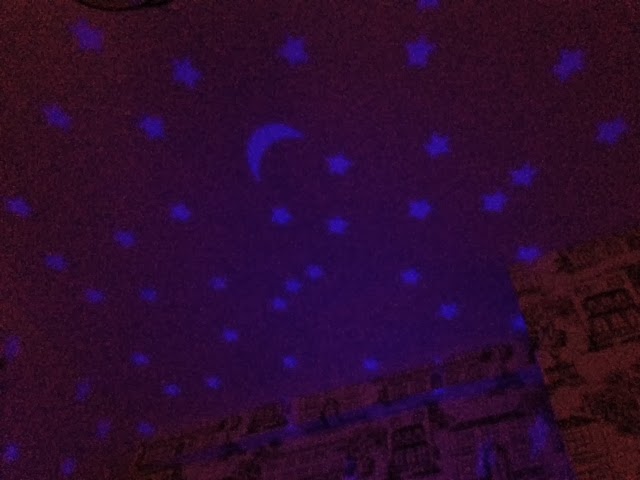 Baby-grows come in standard sizes, but if you happen to have a baby with hobbit feet (like Albert, he takes after me), then no baby grow will fit their toes in. You’ll end up cutting the feet out of all of them just so they have something to wear, and so you’ll need socks to keep them warm.

Albert’s feet through the baby grow: 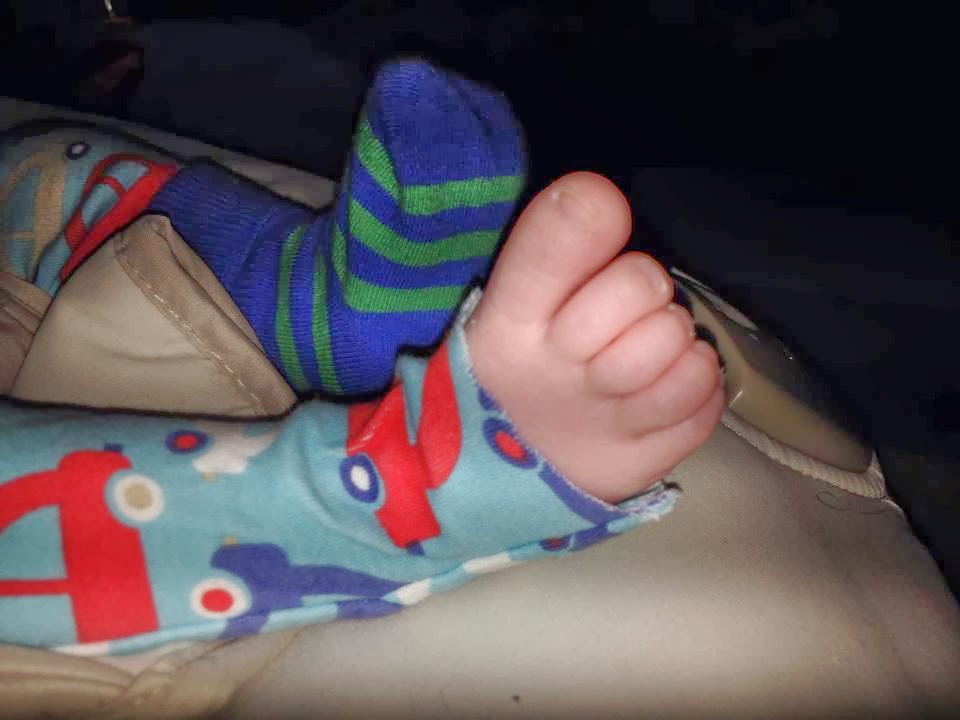 You won’t have time to Google a million different things about your baby within the first hour of the birth, and everything you have read will be forgotten anyway with the hectic-ness of everything. So it’s good to have some bookmarks for information sites, dadvice columns etc you can quickly find. I thought ‘Oh I’ll just find some when I need them.’ WRONG. You don’t want to be searching “is my baby’s poo a normal colour?” at 3.30 in the morning when you absolutely HAVE TO KNOW RIGHT NOW, when you can already have it bookmarked.

And that’s about it for my alternative top tips for new dads. Do you have any of your own you want to share?
Posted by Liam Bishop at 14:40