My child is a genius! In my eyes anyway (and probably MENSA as well). He can roll over! I fully appreciate moments like this in my past when other parents have said similar comments to me about their own children, and I have thought Really? Everyone rolls over! (especially the ones in the bed as per the nursery rhyme) But now I have my own little one, I understand what they mean. Genius behaviour. 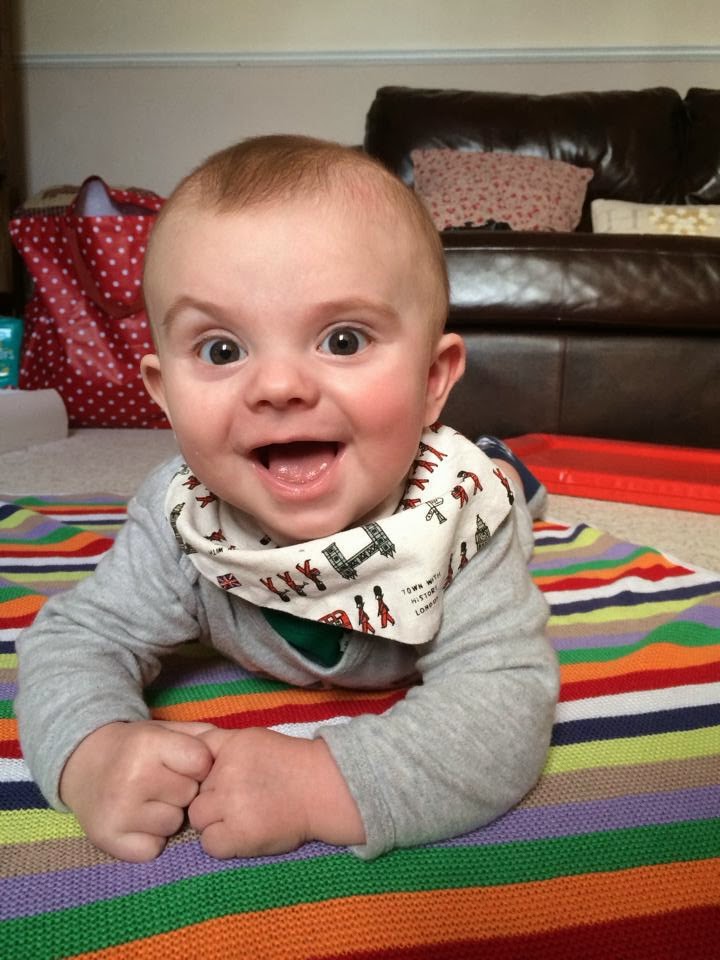 So now we all agree my boy is an established genius, he is looking for some brain stimulation. He is starting to get control over his arms and hands now, and has been developing his Iron-Strong Grip (seriously, he has robot like strength in those tiny hands). Both of these things mean he is starting to get into toys! We have quite a few toys for him but we have a certain few that we are using to play with him and keep him entertained, and that he is at the right age for (unfortunately he is not old enough for Skylanders yet).

I thought I would do a mini review of each of his current toys he is using. I have my patented* JUDGEMENT SCALE, and I have figured the 7 best things to judge them on. Suitability For Baby Eating, Educational, Durability, Fun Level, Danger Level!, Parent Annoying-ness Level, and Does Bert Like It?

*In no way is this patented

The Judgement Scale ranges from 1 to 10. 10 being HOLY COW THIS IS AWESOME, and 1 being Do we really want to give this to our children??

Disclaimer: These views are my own, nobody has given me these toys free or asked me to do this as part of any PR, I just like toys and judging. 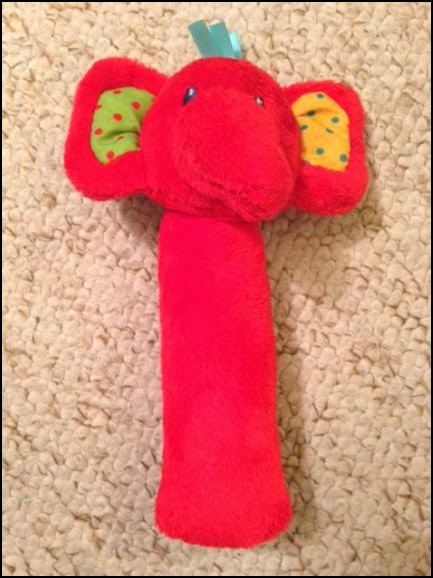 Bert got this for Christmas from his Nanny and Grandad, and it is one of his favourites. It’s a furry rattle resembling an elephant, with a squeaker inside and crinkly sounding ears.

Suitability for baby eating – 4
Bert loves to put this in his mouth, and the shape and softness means he can jam it right in. But it isn’t chewy so not sure it helps with teething so much, and it’s also fluffly, meaning the copious amounts of drool coming out Bert’s mouth often make it a damp stick of fur.
Educational – 5
It’s an elephant head with ears and eyes and a mouth, so that’s good for nature enthusiasm. But it’s red and on a stick and furry, 3 things which elephants aren’t. So half and half.
Durability – 7
Pretty solidly put together, but it is fur so won’t last as long as plastic (ie 500,000 years in a landfill)
Fun level – 9
It squeaks and the ears crinkle. Babies find that funnier than Seinfeld! Plus it’s a red elephant.
Danger level! – 2
It’s soft, so Bert can jam it into his face multiple times without poking his eye out.
Parent annoyance level – 6
Higher than avergae. It squeaks and crinkles during Breaking Bad, and gets covered in drool which makes it damp to hold.
Does Bert like it? – 9
It’s one of his favourites.

What Bert says about it: Splsplslslppslsls *dribble* 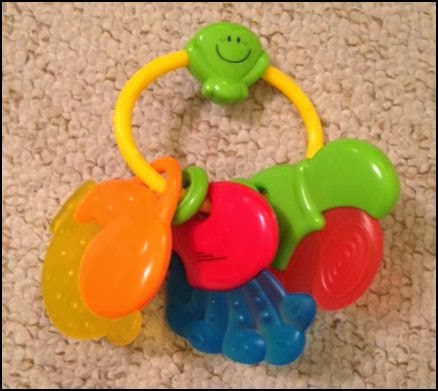 This is a set of teething keys on a ring. They don’t open anything (that I know of, if they did it would probably be a gateway to Narnia)

Suitability for baby eating – 7
They are designed to be chewed and stuck in a babies mouth. But at the moment because of the shape and weight, Bert finds it quite hard to actually get the right bits in there.
Educational – 2
They are sort of anti-educational, as we call them keys. So in a way we are teaching him to put keys in his mouth. Which could indirectly lead to when he is older, him swallowing daddy’s car keys when we need to go out. How these things spiral out of control.
Durability – 10
It’s plastic, as stated above. It’ll probably last a million years if it doesn’t snap in half, and Bert isn’t THAT strong yet.
Fun level –4
Are key’s fun? They clack when he shakes them.
Danger level! – 7
As per above, we don’t want him to get in the habit of shaking things on rings e.g. normal keys, measuring spoons, expensive charm bracelets. Plus they are quite unwieldy leading to a few pokes in the eye.
Parent annoyance level – 2
They are quite quiet, they keep themselves to themselves.
Does Bert like it? – 8
He enjoys shaking them and chewing them when he can get them in his mouth. It’s like a challenge to him. 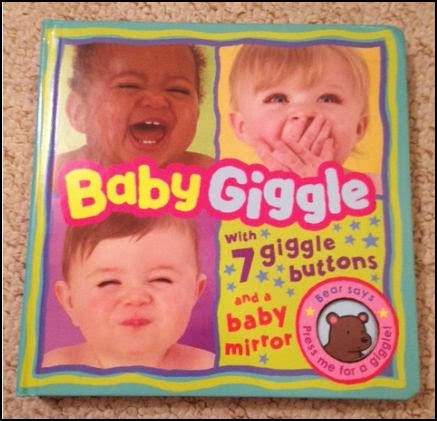 This was another Christmas present from Bert's other Nanny and Grandad. Not a toy that he uses himself as such, but one we use with him. It has a sort of mirror inside so he can see himself, and when you press the buttons it has sounds of babies laughing. LOL!

Suitability for baby eating – 2
It’s a book so may get soggy and possibly teeth marks in the future. And it’s quite large.
Educational – 4
It’s a book, and any book is good. Get him started young! But otherwise it’s just him looking at himself laughing along with other babies, which I imagine probably helps social development.
Durability – 3
May get dog eared with continued use and possible battery running out/snapped in half by baby Hulk.
Fun level – 10
It’s babies laughing! The whole thing is based on fun. Bert loves it and so do we.
Danger level! – 7
It’s quite heavy, if he was to use it himself he may become stuck under it like a giant cardboard tent.
Parent annoyance level – 6
Once he can use it himself I expect hours and hours of baby laughing on a loop. HA HA.
Does Bert like it? – 7
He loves the laughing and looking at himself in it. Ego. 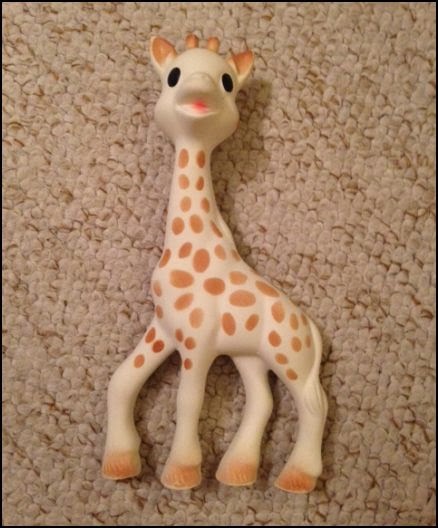 This is a rubber like chew toy from France. Apparantly a few years ago this French chap invented them as baby toys were rubbish, and they have been making them to the same recipe ever since (do toys have recipes?). Check out the website here.

Suitability for baby eating – 8
Made to be chewed and seems the right mix of hard and soft. The only downside is the shape is hard for him to get in his mouth sometimes.
Educational – 8
It’s a Giraffe which looks pretty realistic (compared to the Elephant), so he has a head start on the education of African land mammals.
Durability – 9
Meant to be chewed on, and has no joints that could come apart (just like a real Giraffe!)
Fun level – 7
What’s not fun about chewing a Giraffe? It squeaks as well.
Danger level! – 5
Sometimes it can flick outwards and spray drool everywhere. Or flick inwards and do an eye poke. It also has quite long legs so can get a bit far down his throat causing him to cough.
Parent annoyance level – 2
It’s mostly silent. Plus Sophie has a coy but alluring look in her eyes which is hard to hold a grudge against.
Does Bert like it? - 10
He has started a relationship with it. 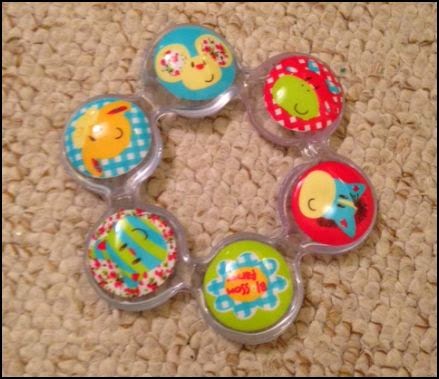 Another chew toy. It’s a ring that you chew. It’s ring shaped. It’s a good descriptive name. Nothing more to say.

Suitability for baby eating – 9
See the name, chew ring. Says it all!
Educational – 2
Again, it’s a ring. It has pictures of flowers on, so it may spark a subconscious interest in horticulture.
Durability – 5
It flexs enough but I feel it may break or split with prolonged chomping, which is likely to happen.
Fun level – 3
Mainly just used for chewing, and doesn’t have that many bright colours on it. Plus it can get stuck on his leg or arm and he can’t get it out. And having a toy stuck on you is never fun (or indeed a toy stuck IN you, as they tell me in the A&E department)
Danger level! – 4
As per above, possible splittage and getting stuck on limbs.
Parent annoyance level – 2
It’s a quiet one, but he gets annoyed if it gets stuck, which annoys me.
Does Bert like it? – 6
When it’s doing its job and not trapping him, he loves a chomp.

What Bert says: Stony silence, then an open mouthed lunge.

So there we go! Bert’s overall favourite toy at the moment seems to be Sophie the Giraffe. Well done Sophie, you’re a good toy. You’ve earned your place in the Albert Bishop Toy Hall Of Fame. As your prize you will be chewed into oblivion. 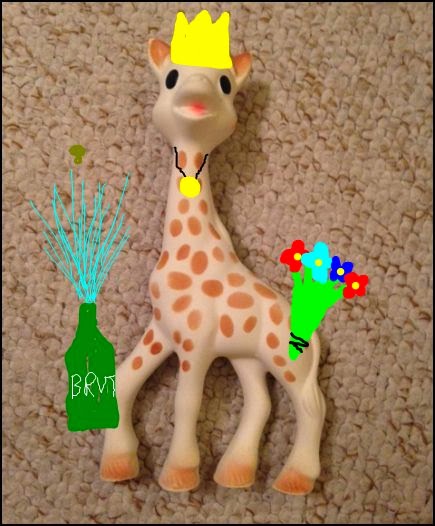 What toys do your younglings like?
Posted by Liam Bishop at 11:36