One of my recent posts was about toys, so I thought I would carry on the theme and tell you all about a recent competition win of mine! I entered a facebook competition over at The Entertainer and was lucky enough to win the below. It’s a TMNT Secret Sewer Lair Playset! Suitable for 4-17 years old (and also 29 year old Man-Childs). There is also a Magnetic Scribbler (like a drawing tablet thing) and a Donatello figure. 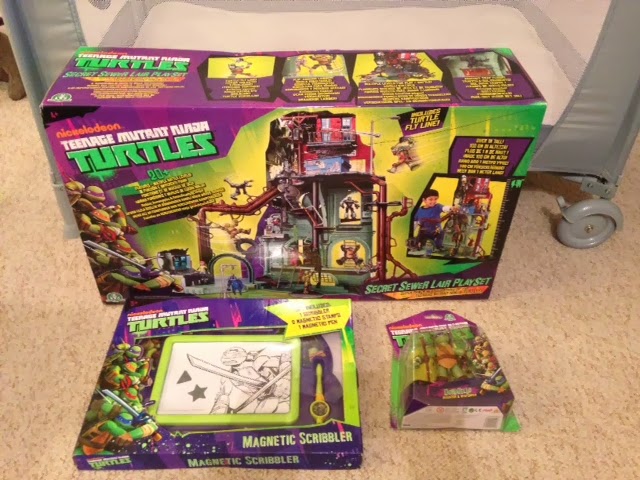 I have always been a massive fan of Teenage Mutant Ninja Turtles, ever since they first came out when I was a kid. They have stayed with me and I still wear TMNT t-shirts and have TMNT pyjamas. I remember really clearly the year the toys first came out, getting the whole set with my brother for Christmas, and going mad after opening them on Xmas day (I had Leo and Donny, my brother has Raph and Mikey). I want Bert to enjoy them as much as I do!

After opening the packet I was presented with a thousand million  pieces and knew it would take a while to put together! Here are some shots of me putting it together and Bert helping. It did take a while, and just as long to put the stickers on, but it was worth it. I thought it might be a bit wobbly but it’s pretty stable now it’s up. 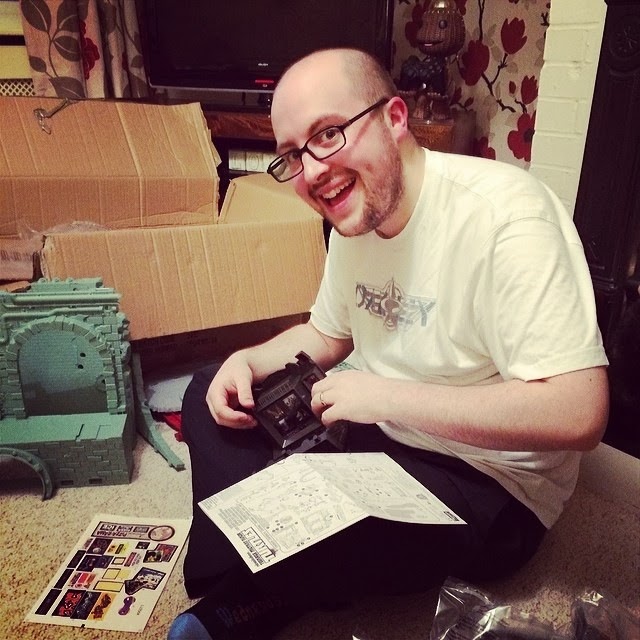 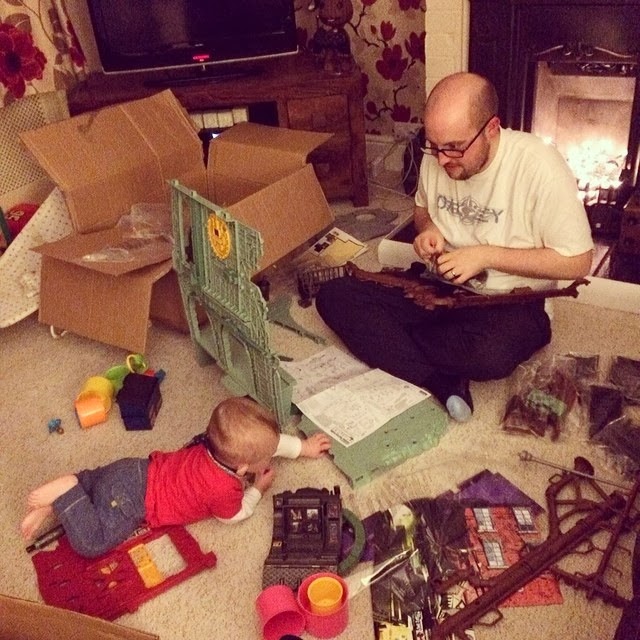 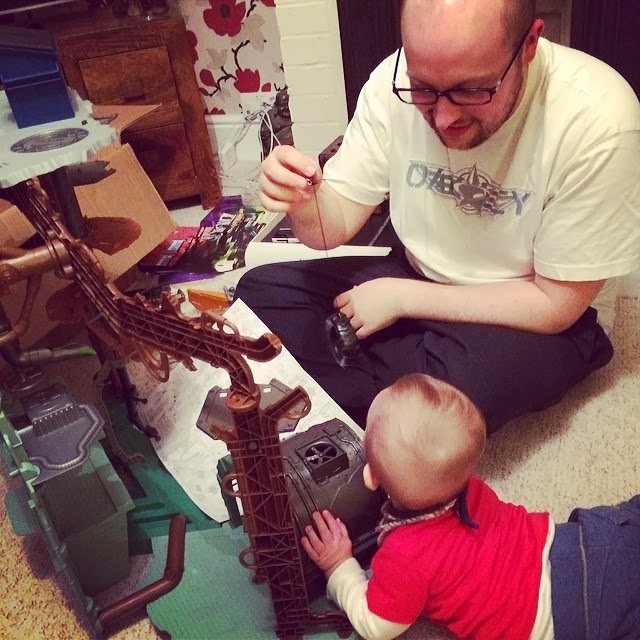 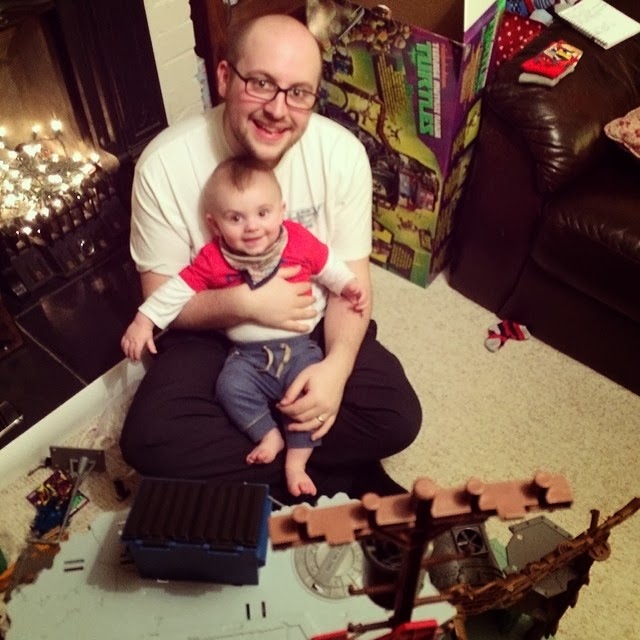 And this is the final product! 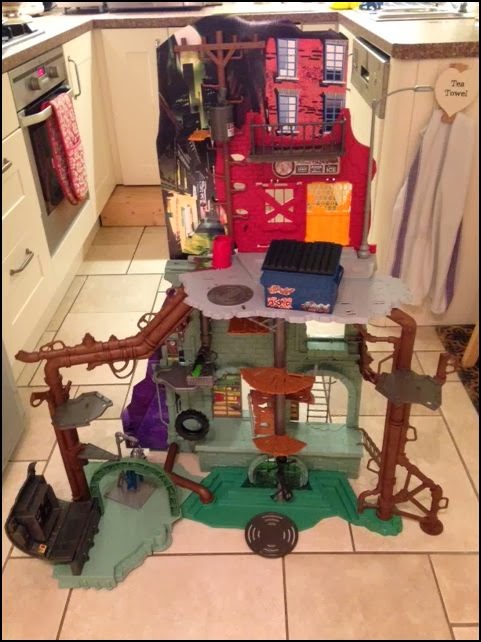 It’s huge! And let me tell you, it’s awesome. It has a ton of features and little nooks and crannys and moving pieces. I would have loved this as a kid (I love it now and I’m almost 30!). I also opened the Donny toy and moved the set into the kitchen where I had some more space to play with it. Here are some of the shots I took: 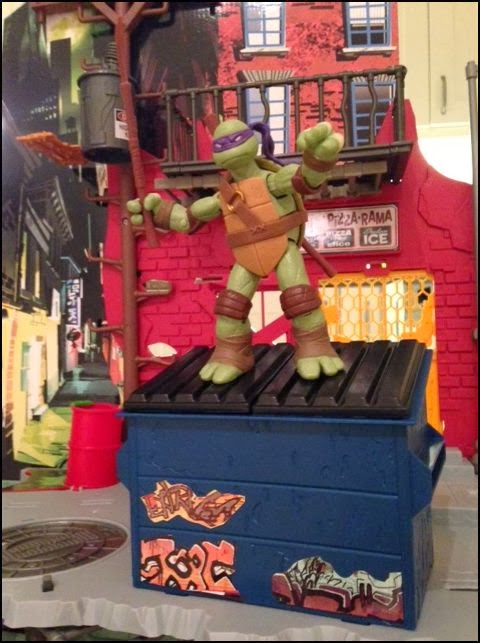 Hanging out on the swinging tyre: 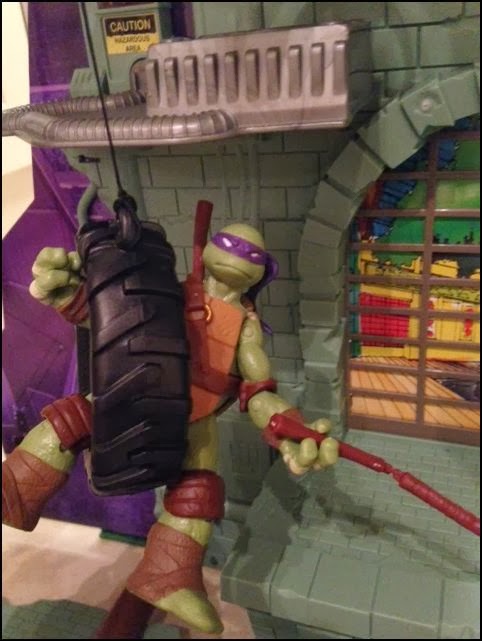 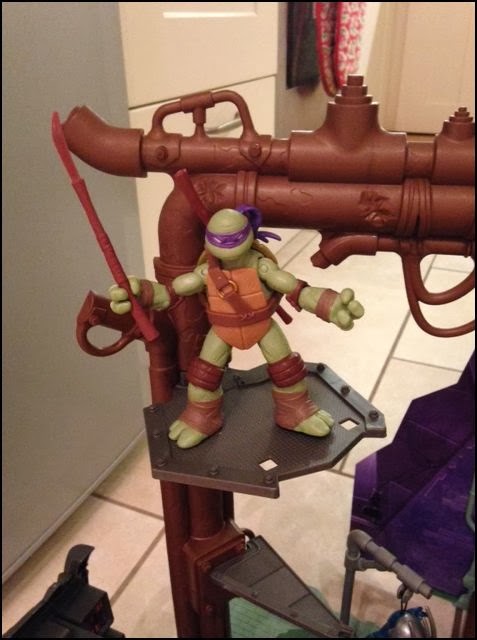 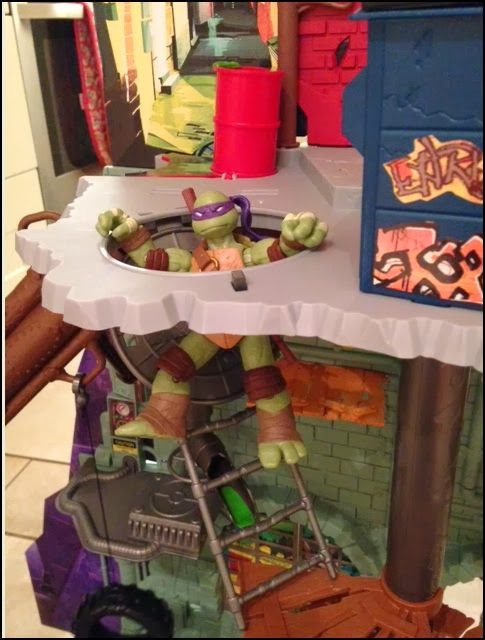 This is spring loaded and actually fires. 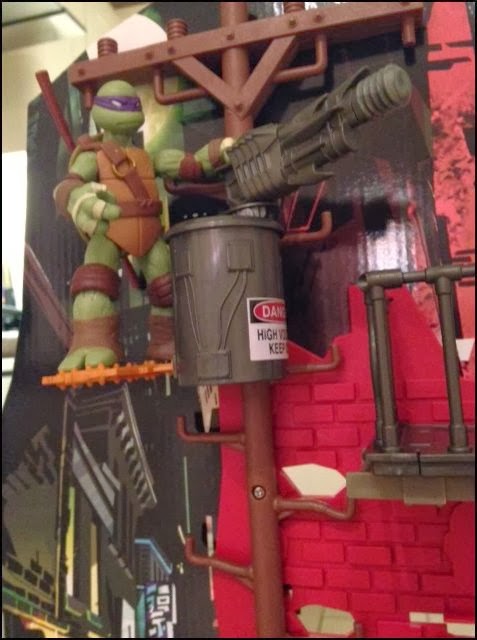 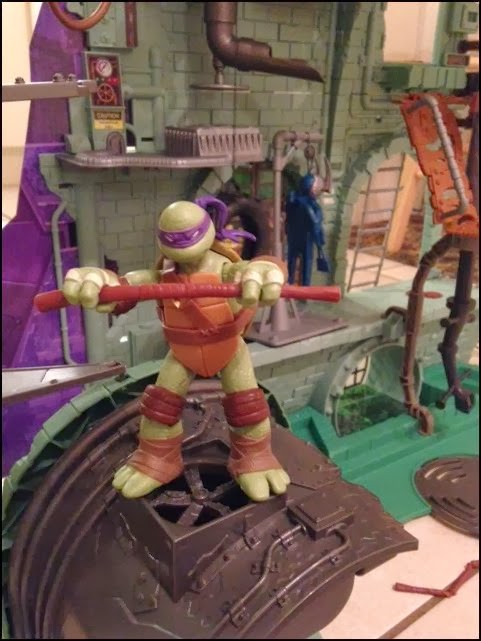 The above pipe folds out into a computer station: 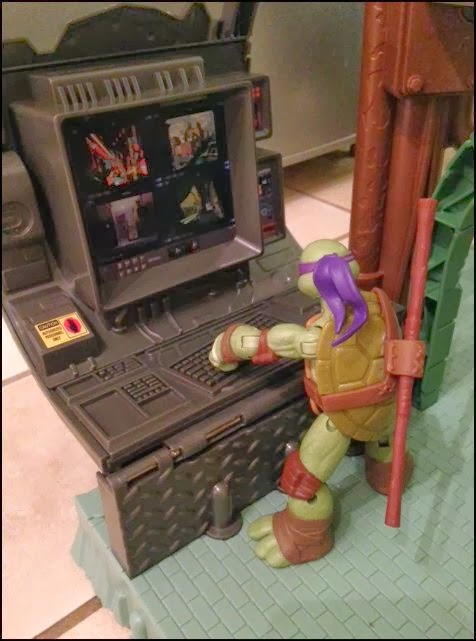 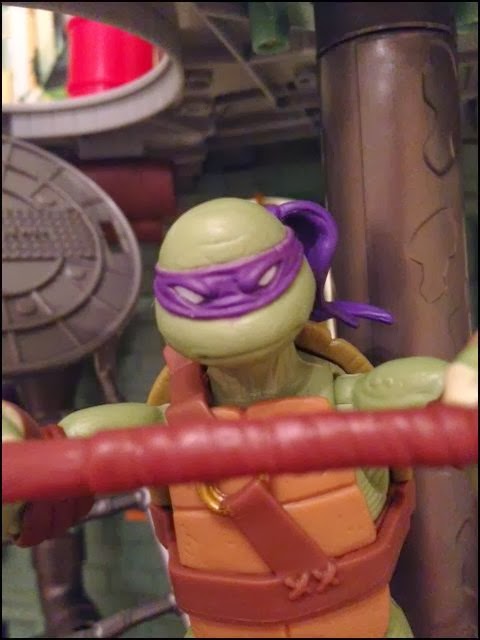 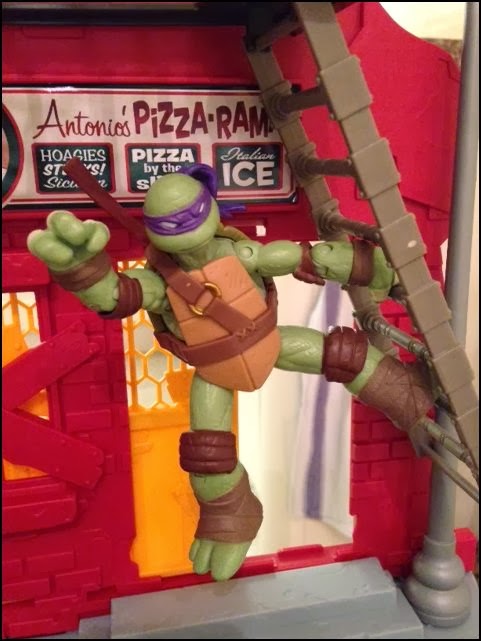 There is a movable training dummy of Shredder: 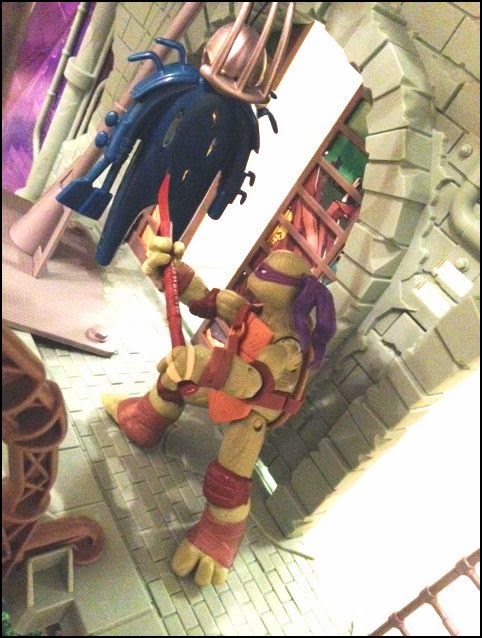 There is a seperate zip line and clamp that you can fix to somewhere else in the room, and then have one of the Turtles zipline down into the playset. 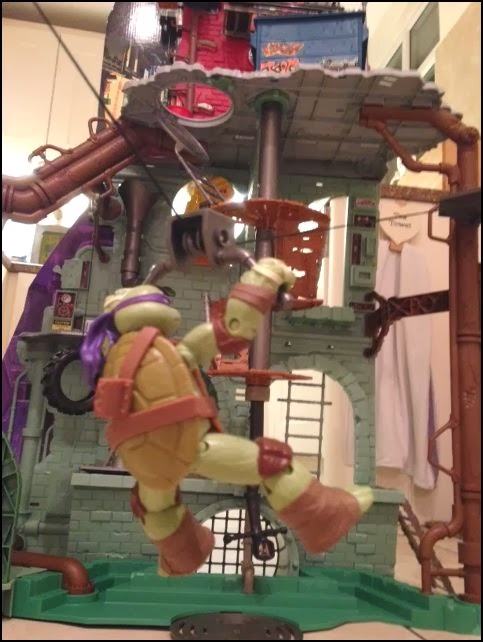 Cat watching the zipline and 'helping' out: 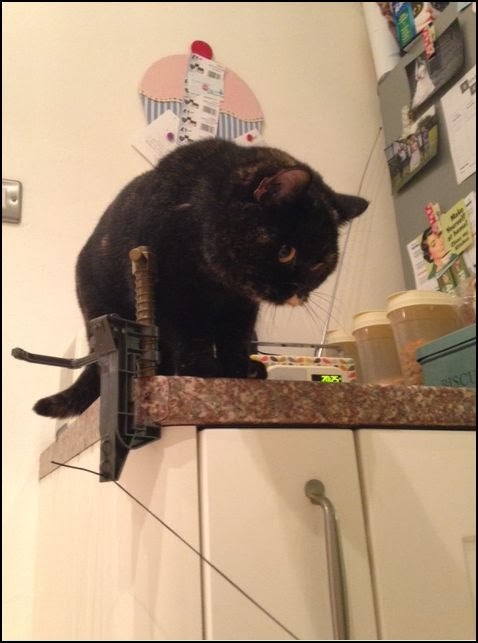 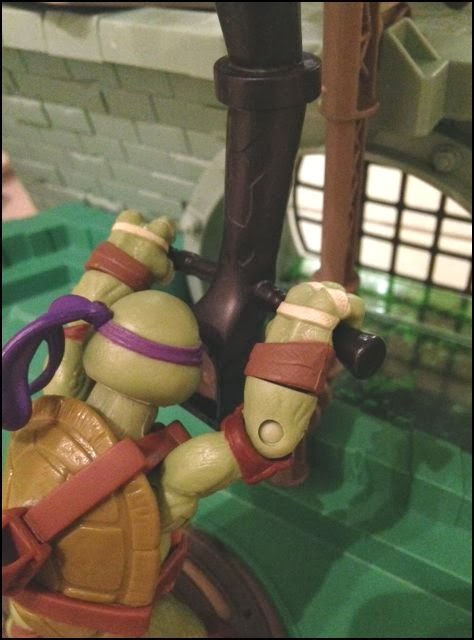 Using the periscope makes the binoculars go up and down and out the dumpster. 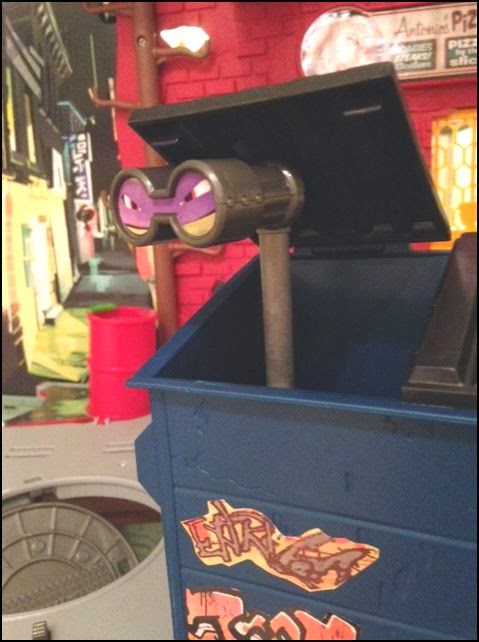 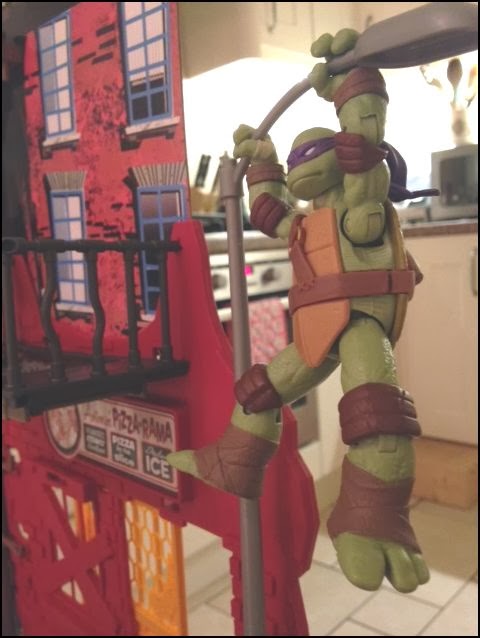 After playing for an hour or so I thought I would take a look in my Man-Cave upstairs (aka cupboard where I keep all my stuff), and found these bad boys at the bottom of a box! 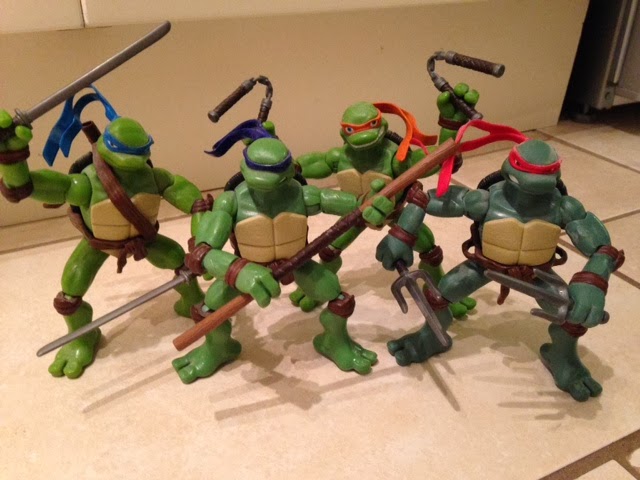 All 4 of the clan, left over from my second toy-collecting career in my early twenties! These are slightly larger figures than the newer set of toys, but they still fit in the playset brilliantly. Check out the guys hanging out looking badass. 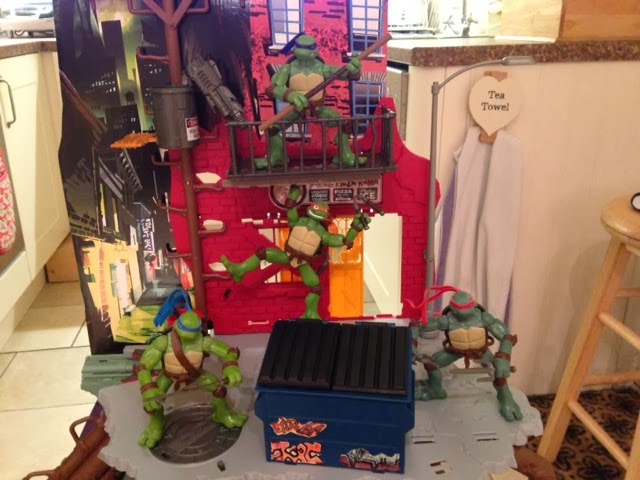 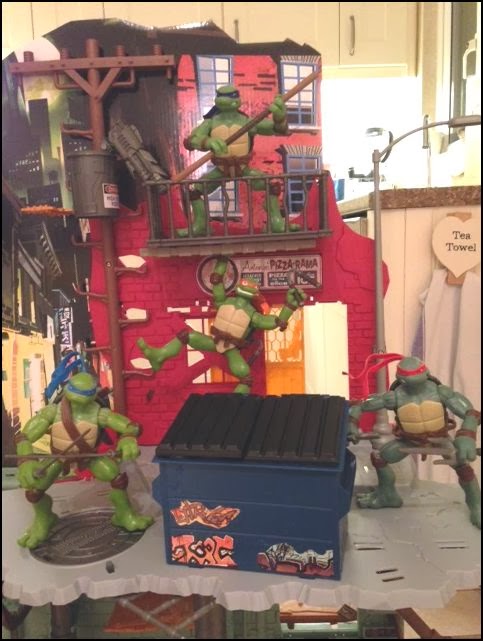 I’ll keep this up for a while (so I can test it some more), then I might attempt to pack it back in the box until it’s needed again as it’s so big I can’t keep it out and I don’t want Bert getting his hands on it yet and chewing it all! So until next time, look who else I found? The Turtles are in a tight spot here! Will they escape? Duh duh duh!!! 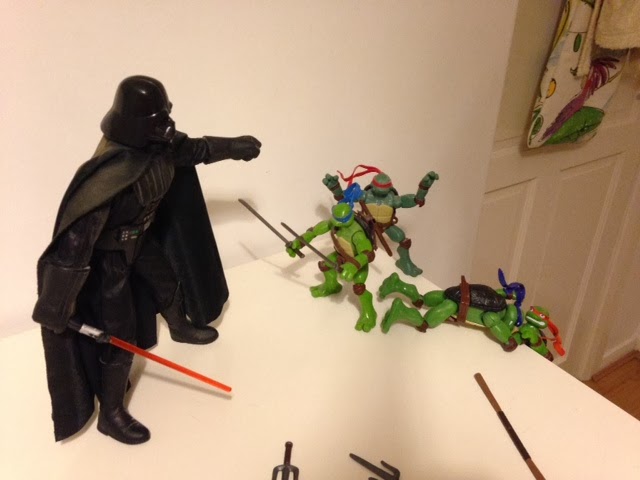