As we have had a few days of sun recently, luckily on my week off from work, I decided it would be a good idea to get some ‘Summery’ jobs done, and one of these was doing a changing-rooms style makeover on our outside Wendy House. I know what you are thinking, and I was thinking it as well – GARDEN SAUNA! But after some consideration, I didn’t think a cramped sauna for 1 person would be too practical, so we settled on something else. A Den for Albert! It won’t be long before he is wanting to go outside in the garden so we wanted to have somewhere for him to play out there and call his own. And what is better than having your own mini Bat-Cave to play in? 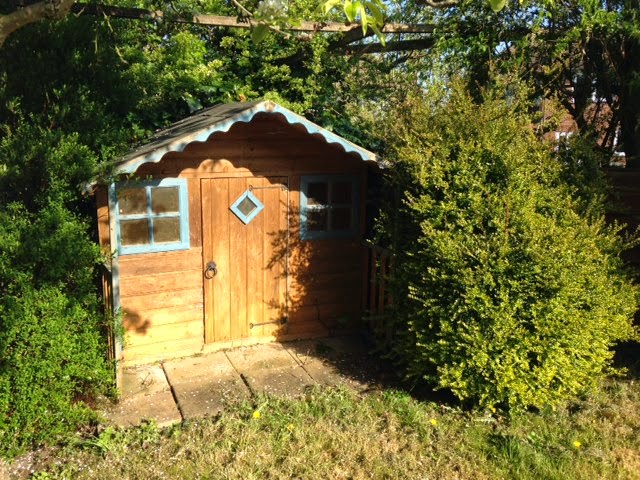 This Wendy House was already in our garden when we moved in a few years ago, but it hasn’t been used for a while, and so was looking a bit worse for wear. Again I know what you’re thinking, isn’t that an entrance to Narnia? Probably not, at least not for me. Albert may have more luck.


As I had one of my good friends Charlie visiting me for the week, we decided to be manly and get it ready while we had some free time. We had a few beers, a few paintbrushes and a few tunes. What more could we need? Lets DIY it!


Here are some more pictures of the Narnia house pre-makeover. 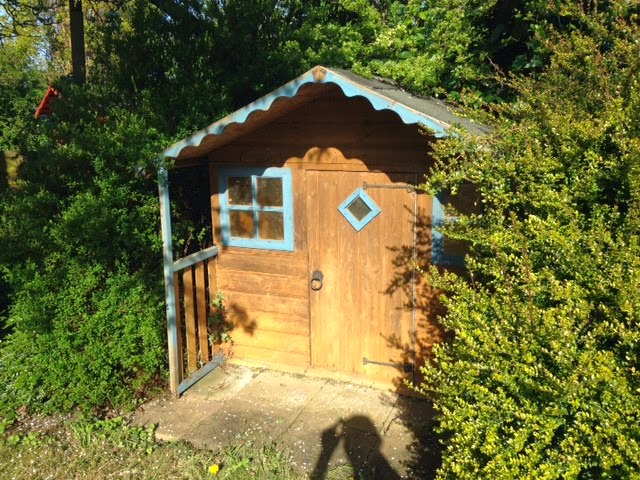 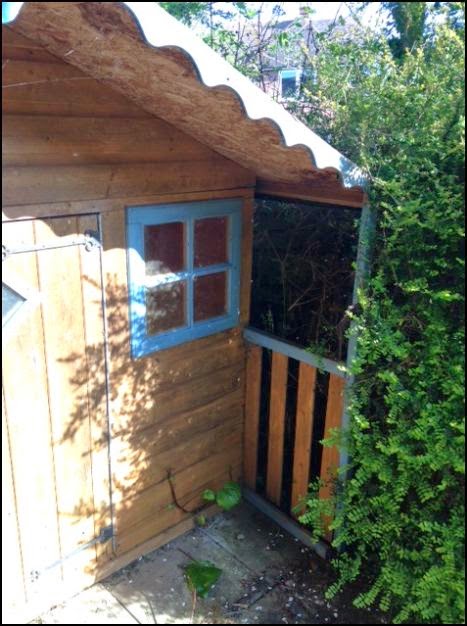 We started off by trimming back the bushes and cleaning away all the muck from the stones out the front. The side fencing was a bit busted and rotting and so a bit wobbly. I jigsawed up some old wood to make some brackets and reinforced it with wood screws at the sides out of view (getting a face full of branches in the process) so as to make sure it wouldn’t come off when a 2 year old starts swinging on it.


As the coloured paint trim was coming off and looking a bit faded, we used the power sander (no job too small for a power sander) and 2 extension cables to reach outside all the way across the garden, to sand it all down. We then masking-taped up all the woodwork ready to paint.


For the brown wood sections we used some old brown fence paint I found in my own shed and gave it 2 coats all over. For the trim we used some old green wood paint we had left over from last summer when I was painting our garden furniture/gun shootout protection barrier (you can read about it here), so we used that and gave the trim 2 coats as well.


Next it needed a clean inside. This was the bit I didn’t want to do. It’s crowded for an full grown Man-Child, a bit dark and covered in cobwebs. Luckily we had help from another friend, Hetty. 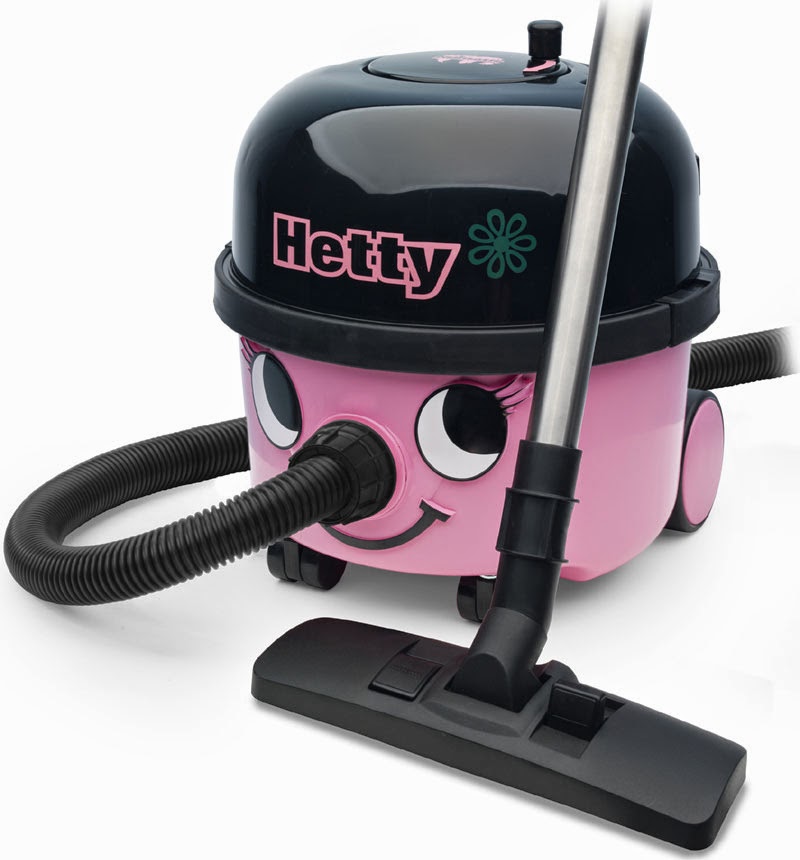 Hetty was pretty good here, she sucked up all the leaves and cobwebs inside without a fuss. There were indeed a few spiders already living in there, so I went for the ‘crush with the end of the hoover before sucking up’ method of eviction. There was also an old wasp’s nest! Thankfully it was empty, I didn’t want to have to fight a bunch of angry wasps as well. I just sucked that straight up. The Narnia/Bat-Cave/Wendy House already had a carpet (it’s a comfy Bat-Cave), so Hettie cleaned that up for us as well.


There was a big hole at the top where obviously the wasps and other twatty insects got in, so I nailed a square of wood over it to stop anything else entering and taking residence. It could have been used as a ready-made sauna air-hole, but never mind. Finally I used some Windowlene to clean the windows inside and out.


Finally I decided we needed a sign above the door. I originally wanted a dragon’s head motif, but after googling some designs I decided they would be too intricate and near impossible to jigsaw out! So we finished up on a circle. I cut it out and sanded the edges, and painted it in the same green wood paint as the trim. Now we needed a name! After a few suggestions we decided against anything with swear words, and settled on ‘The Den’. I sharpied on the name and nailed it up. Job done! What do you think? (It looks a bit dark but that's because the sun had moved round and it's in the shade now). 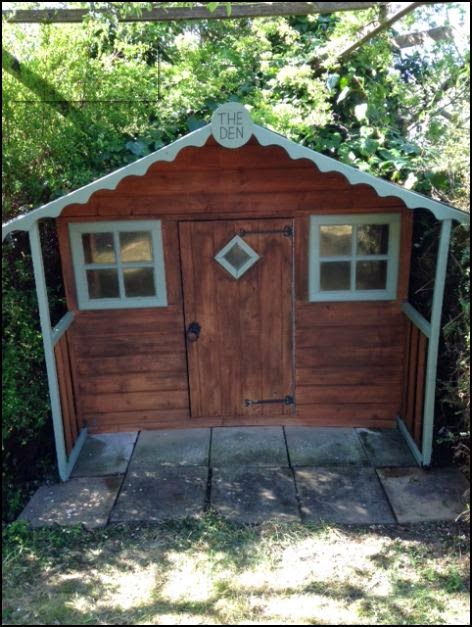 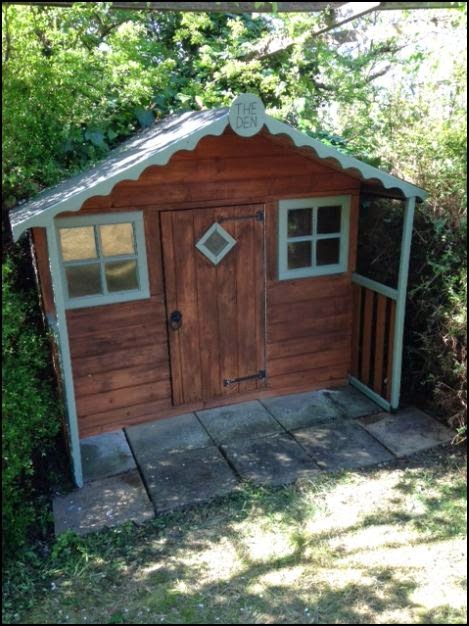 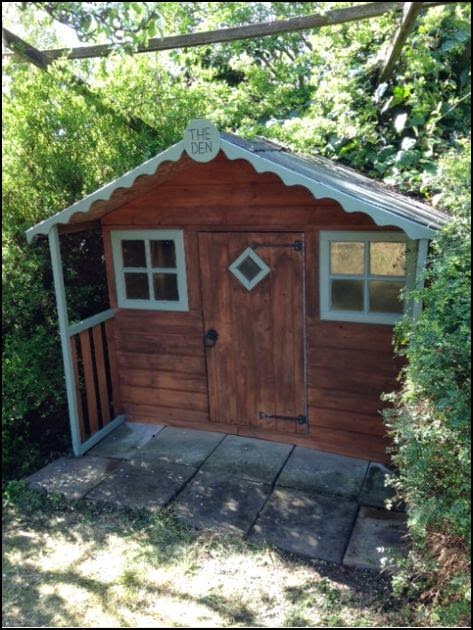 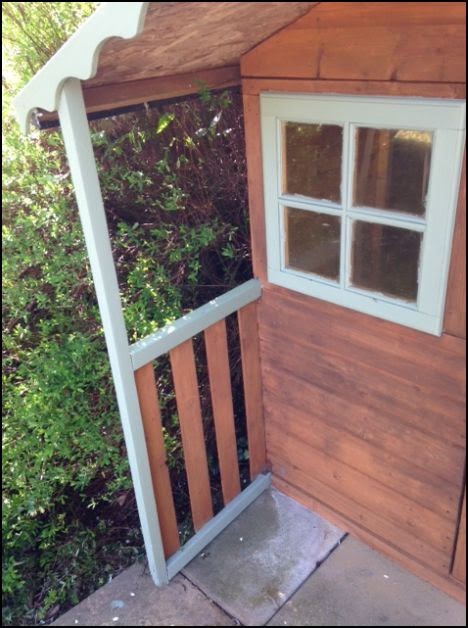 Now The Den is all finished, we just needed something to put inside! You may remember from last year we had Lucy’s old school chair which I had renovated (read about it here). We have put that inside so Albert has somewhere to sit. And that’s about it at the moment! What else do you think should go inside? Here is my wish-list: 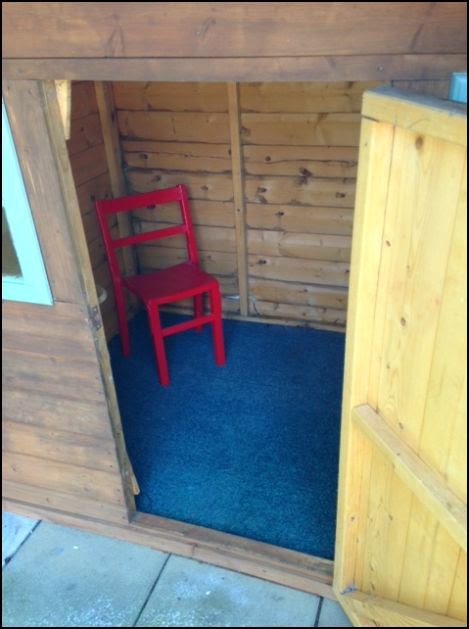 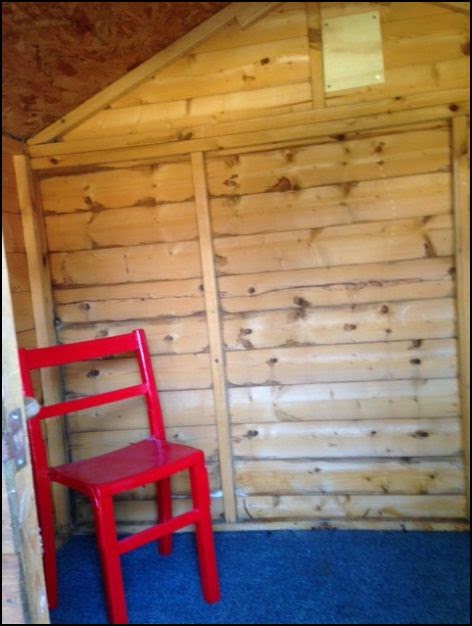 Hopefully when Bert starts exploring the garden he will love playing in The Den. I can’t wait to see what games we can come up with playing in it! Until then, does anyone want a room to rent? Only £250pcm, all bills included, please email me via the form at the side of the blog. 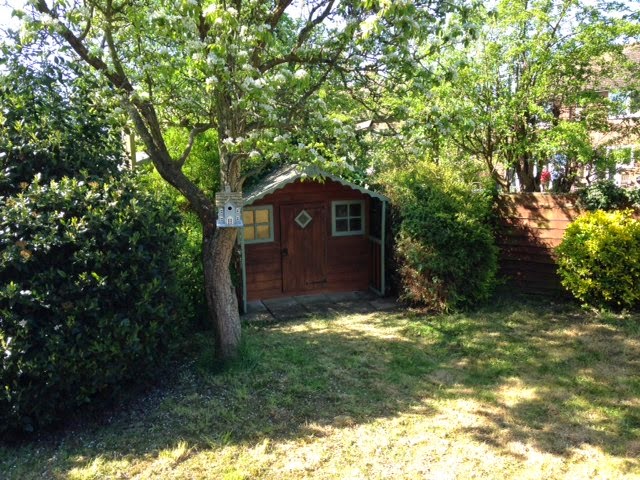